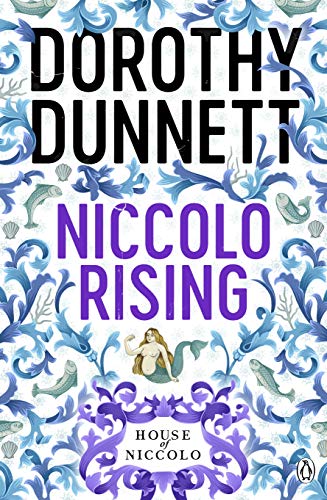 In Stock
$11.39
The time is the 15th century, when intrepid merchants became the new knighthood of Europe. Among them, none is bolder or more cunning than Nicholas vander Poele of Bruges, the good-natured dyers apprentice who schemes and swashbucukes his way to the helm of a merchantile empire.
Very Good Good
Only 2 left

Niccolo Rising: The House of Niccolo 1 by Dorothy Dunnett

The time is the 15th century, when intrepid merchants became the new knighthood of Europe. Among them, none is bolder or more cunning than Nicholas vander Poele of Bruges, the good-natured dyers apprentice who schemes and swashbucukes his way to thehelm of a merchantile empire. NICCOLO RISING, Book One of the series, finds us in Bruges, 1460. Street smart, brilliant at figures, adept at the subtleties of diplomacy and the well-timed untruth, Dunnett's hero rises from wastrel to prodigy in abreathless adventure that wins him the love of the strongest woman in Bruges and the hatred of two powerful enemies. NICCOLO RISING combines history, adventure and high romance in the tradition stretching from Alexandre Dumas to Mary Renault.

-- - * - *
A storyteller who could teach Scheherazade a thing or two about pace, suspense and imaginative invention -- - * New York Times *
Marvellous, breathtaking -- - * The Times *
A masterpiece of historical fiction -- - * Washington Post *
One of the greatest tale-spinners since Dumas -- - * Cleveland Plain Dealer *
Lashings of excitement, colour and subtlety -- - * The Times *
Vivid, engaging, densely plotted - are almost certainly destined to be counted among the classics of popular fiction -- - * New York Times *

GOR001234439
Niccolo Rising: The House of Niccolo 1 by Dorothy Dunnett
Dorothy Dunnett
House of Niccolo
Used - Very Good
Paperback
Penguin Books Ltd
1988-11-03
592
0140113916
9780140113914
N/A
Book picture is for illustrative purposes only, actual binding, cover or edition may vary.
This is a used book - there is no escaping the fact it has been read by someone else and it will show signs of wear and previous use. Overall we expect it to be in very good condition, but if you are not entirely satisfied please get in touch with us.