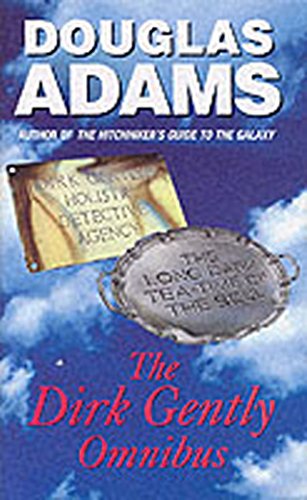 Dirk Gently is a detective - well, a sort of detective.

Dirk Gently is a detective - well, a sort of detective. There is a long and honourable tradition of great detectives and Dirk Gently does not belong to it. Dirk Gently calls himself a 'holistic detective' and above all, he believes in 'the interconnectedness of all things'. Sherlock Holmes observed that once you have eliminated the impossible, then whatever remains, however improbable, must be the truth. Dirk Gently, however, does not like to eliminate the impossible.

In Dirk Gently's Holistic Detective Agency a simple search for a missing cat reveals two ghosts, a dodo, an Electric Monk, the devastating secret that lies behind the whole of human history and threatens to bring it to a premature close, and, finally, the utterly terrifying reason why Richard MacDuff has had a sofa stuck on his stairs for three weeks.

As The Long Dark Tea-Time of the Soul opens, a passenger check-in desk at Heathrow Airport shoots up through the roof engulfed in a ball of orange flames. The usual people try to claim responsibility. However, no rational cause can be found for the explosion - it was simply designated an act of God. But, thinks Dirk Gently, which God? And why? What God would be hanging around Terminal Two of Heathrow Airport trying to catch the 15.37 to Oslo?

In these two delightfully odd detective stories, Adams explores once again the realm of the unknown, in the style of science fiction that brought him fame with The Hitch Hiker's Guide to the Galaxy.

Douglas Adams was born in Cambridge in 1952. He was educated at Brentwood School, Essex and St John's College, Cambridge, where he read English.

As well as writing all the different and conflicting versions of The Hitch Hiker's Guide to the Galaxy, he has been responsible for Dirk Gently's Holistic Detective Agency, The Long Dark Tea-Time of the Soul, Last Chance to See... with zoologist Mark Cawardine, and, with John Lloyd, The Meaning of Liff and The Deeper Meaning of Liff. Douglas Adams died in May 2001.

GOR010376895
The Dirk Gently Omnibus by Douglas Adams
Douglas Adams
Used - Like New
Hardback
Cornerstone
2001-08-02
512
0434009199
9780434009190
N/A
Book picture is for illustrative purposes only, actual binding, cover or edition may vary.
The book has been read, but looks new. The book cover has no visible wear, and the dust jacket is included if applicable. No missing or damaged pages, no tears, possible very minimal creasing, no underlining or highlighting of text, and no writing in the margins.