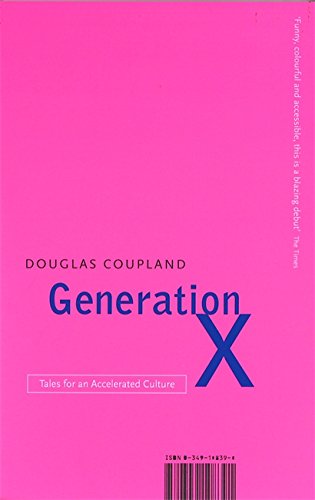 Generation X: Tales for an Accelerated Culture by Douglas Coupland

Andy, Dag and Claire have been handed a society beyond their means. Twentysomethings, brought up with divorce, Watergate and Three Mile Island, and scarred by the 80s fallout of yuppies, recession, crack and Ronald Reagan, they represent the new generation- Generation X.
Fiercely suspicious of being lumped together as an advertiser's target market, they have quit dreary careers and cut themselves adrift in the California desert. Unsure of their futures, they immerse themselves in a regime of heavy drinking and working in no future McJobs in the service industry.
Underemployed, overeducated and intensely private and unpredicatable, they have nowhere to direct their anger, no one to assuage their fears, and no culture to replace their anomie. So they tell stories: disturbingly funny tales that reveal their barricaded inner world. A world populated with dead TV shows, 'Elvis moments' and semi-disposible Swedish furniture.

A new age J.D Sallinger on smart drugs. * TIME OUT ** *
Dizzying sparkle and originality. * THE TIMES, ** *
Quirky, witty, with an affection for its characters which lifts it above the level of such as Bret Easton Ellis's 'Less than Zero. * MAIL ON SUNDAY ** *
A Landmark book. * DAILY TELEGRAPH ** *

Douglas Coupland studied art and design. He has published nine novels and several non-fiction books in 35 languages. He has written and performed for the Royal Shakespeare Company in Stratford, England, and in 2001 resumed his practice as a visual artist, with exhibitions worldwide.

GOR001239058
Generation X: Tales for an Accelerated Culture by Douglas Coupland
Douglas Coupland
Used - Very Good
Paperback
Little, Brown Book Group
1996-11-07
224
0349108390
9780349108391
N/A
Book picture is for illustrative purposes only, actual binding, cover or edition may vary.
This is a used book - there is no escaping the fact it has been read by someone else and it will show signs of wear and previous use. Overall we expect it to be in very good condition, but if you are not entirely satisfied please get in touch with us.