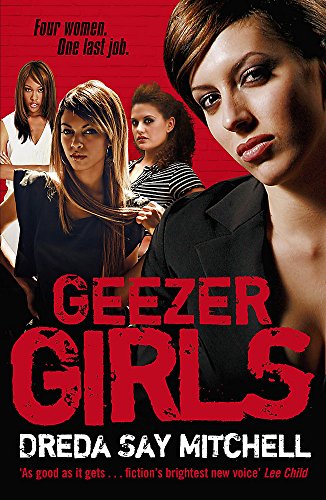 In Stock
$9.69
Fast-paced London thriller for fans of Bad Girls and the Martina Cole readership.
Very Good Good
9 in stock

Fifteen-year-old Jade Flynn and three other girls were the sole occupants of the fourth floor of St Nicholas Care Home for Children. They were forced to take part in 'special community projects' - drug dealing, money laundering, gun running. Required to work for a man they called The Geezer. Until a shocking event made them rebel. Steal something that wasn't theirs.

So they ran. Disappeared.

Jade Flynn is now living a respectable life as Jackie Jarvis and is getting married. She invites her three best friends to be her maids of honour. But someone else turns up as well - The Geezer. He'll kill them, unless they do one last job for him, then they can return to their normal lives. But can they trust him?

This time if they disappear they won't be coming back . . .

'As good as it gets . . . Mitchell is English fiction's brightest new voice' * Lee Child *
'Great read written by a great girl' * MARTINA COLE *
'KILLER TUNE is a sharply observed, incisive and moving story of radical politics, conflicting loyalties and unfinished business.' * Guardian *
'Dreda Say Mitchell is an exciting new talent and her second novel, KILLER TUNE, shows her distinctive take on current urban noir.... The narrative throbs with energy and has a refreshing directness' * Sunday Telegraph *
'An interesting, original novel, worth reading, even if you don't get half the references and in real life would block your ears to the noise' * Literary Review *
'Mitchell's plot is elaborate but tightly played, with a backbeat of racial abuse. Killer Tune lays the breezy muscial name-checking of Hornby's High Fidelity over a well-crafted murder mystery.' * Financial Times *
'Great read written by a great girl' * MARTINA COLE *

Dreda Say Mitchell is the bestselling and critically acclaimed author of Spare Room, the Gangland Girls and Flesh and Blood series, as well as the DI Rio Wray thrillers Vendetta and Death Trap. Her debut was awarded the CWA's John Creasey Dagger and she chaired the Harrogate Crime Fiction Festival in 2011. Since her sixth book she has been co-writing with Tony Mason. She has been a frequent guest on television and radio including Question Time, BBC Breakfast, Newsnight, Victoria Derbyshire, The Stephen Nolan Show, Front Row, Woman's Hour and numerous others. She has also presented Radio 4's Open Book. Dreda was named one of Britain's 50 Remarkable Women by Lady Geek in association with Nokia. She was born and raised in the East End of London where she continues to live.

GOR001223456
Geezer Girls: Gangland Girls Book 1 by Dreda Say Mitchell
Dreda Say Mitchell
Gangland
Used - Very Good
Paperback
Hodder & Stoughton General Division
2009-07-23
448
0340937114
9780340937112
N/A
Book picture is for illustrative purposes only, actual binding, cover or edition may vary.
This is a used book - there is no escaping the fact it has been read by someone else and it will show signs of wear and previous use. Overall we expect it to be in very good condition, but if you are not entirely satisfied please get in touch with us.