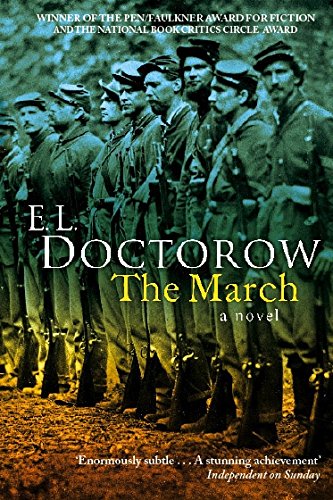 The March
by E. L. Doctorow

Used Price
$9.99
Free Shipping in the US
A brutal and brilliant novel set in the American Civil War.
Reviews:
Trustpilot
Very Good

The March: A Novel by E. L. Doctorow

Doctorow's new novel is set towards the end of the American Civil War and follows General Sherman's epic march with sixty thousand Union troops through Georgia and the Carolinas, one of the major manoeuvres to bring the war to its conclusion. THE MARCH ranges widely over a diverse set of characters - each of whom is brilliantly realised - so that we see the war through the eyes of both white-skinned Pearl (daughter of slave and slave owner) and General Sherman; a deserting confederate who sets himself up as a photographer; a ruthless army surgeon who enjoys his reputation as an amputator; and the two brothers of a brutal slave owner who find themselves in uniforms facing Sherman's forces.
Doctorow's narrative brilliantly blends the intimate and the epic, sweeping the reader along the route of Sherman's notorious march and making us care deeply about each individual's fate.

marvellous, sweeping...The cruelties of war, the desperation, the rape and the pillage, the great rolling river of refugees and freed black slaves all comes indelibly to life. * SUNDAY TELEGRAPH *
Doctorow has created a commanding, timeless meditation on war... Modern and prophetic, it is an astonishing achievement * GUARDIAN *
An entirely convincing recreation of a violent, frantic time, in which his cinematic technique of rapid, short scenes, works wonderfully * DAILY TELEGRAPH *
Historical fiction is always a difficult balancing act for an author, particularly when he is incorporating the thoughts and actions of famous historical figures. Thankfully EL Dotorow is up to the task... * RTE GUIDE *

E. L. Doctorow's novels include Andrew's Brain, Homer and Langley, The March, City of God, Welcome to Hard Times, The Book of Daniel, Ragtime, Loon Lake, Lives of the Poets, World's Fair, Billy Bathgate and The Waterworks. Among his honours are the National Book Award, two National Book Critics Circle awards, the PEN/Faulkner Award, the Edith Wharton Citation for Fiction, the William Dean Howells Medal of the American Academy of Arts and Letters and the presidentially conferred National Humanities Medal. He died in July 2015.

GOR001279006
The March: A Novel by E. L. Doctorow
E. L. Doctorow
Used - Very Good
Paperback
Little, Brown Book Group
2006-11-02
384
0349119597
9780349119595
Winner of PEN/Faulkner Award for Fiction 2006 (UK)
Book picture is for illustrative purposes only, actual binding, cover or edition may vary.
This is a used book - there is no escaping the fact it has been read by someone else and it will show signs of wear and previous use. Overall we expect it to be in very good condition, but if you are not entirely satisfied please get in touch with us.