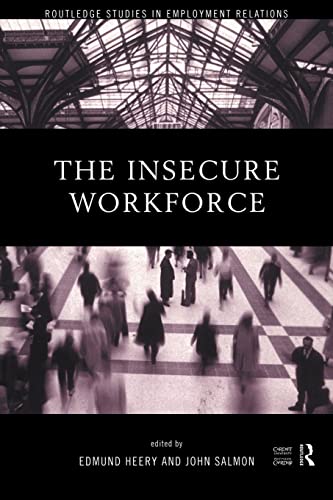 The Insecure Workforce
by John Salmon

Used Price
$12.99
Free Shipping in the US
There has been mounting concern at the costs of the trend towards greater flexibility in the availability and use of labour in the late-20th century. This text explores the validity of claims that this trend will lead to an insecure workforce vulnerable to exploitation.
Reviews:
Trustpilot
Very Good

The Insecure Workforce by John Salmon

For the past two decades employment in Britain has been marked by a search for greater flexibility in the availability and use of labour. In recent years, however, there has been mounting concern at the costs of this trend and an appreciation that the consequence of a flexible labour market may be an insecure workforce, vulnerable to exploitation. It is also widely claimed that rising worker insecurity imposes costs on the wider economy and society through lower rates of skill formation, reduced consumer confidence and family instability.

This collection of essays uniquely brings together writers from the fields of human resource management, industrial relations, social policy, sociology, economics and politics to explore the validity of these claims. Specific issues considered in the book include:

This original analysis through the outstanding essays, leads to the book's key message: that re-building security at work should be a major concern of policy makers.

GOR002352749
The Insecure Workforce by John Salmon
John Salmon
Routledge Studies in Employment Relations
Used - Very Good
Paperback
Taylor & Francis Ltd
2000-02-24
256
0415186714
9780415186711
N/A
Book picture is for illustrative purposes only, actual binding, cover or edition may vary.
This is a used book - there is no escaping the fact it has been read by someone else and it will show signs of wear and previous use. Overall we expect it to be in very good condition, but if you are not entirely satisfied please get in touch with us.