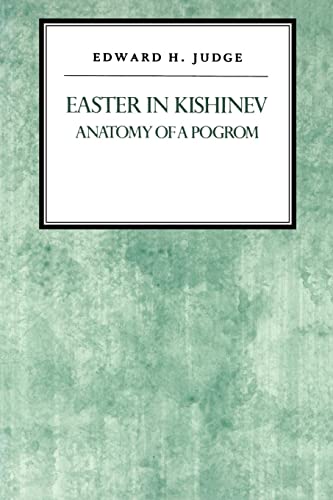 Used Price
$30.99
Free Shipping in the US
Reviews:
Trustpilot
Good

Easter in Kishniev: Anatomy of a Pogrom by Edward H. Judge

Judge's book is the best to date on the Kishinev pogrom of 1903. In seven gracefully written chapters, the author lays out the background of the Jewish question in Russia, profiles the city of Kishinev, narrates the events leading up to and included in the pogrom, and analyzes its causes and effects.
-Choice
A detailed re-examination of the notorious Kishinev pogrom of 1903.
-East European Jewish Affairs
In February of 1903, in a town in the southwestern part of the Russian empire, a peasant stumbled upon the corpse of 14-year old Mikhail Rybachenko, bruised and covered with stab wounds, in a garden. The murder immediately fueled wild rumors that he had been killed by local Jews in need of his Christian blood to prepare their matzah bread. Panic rumors, grounded in sinister superstitions of Jewish sorcery and ritual murder, quickly spread to nearby towns. By April, they had hit Kishinev -- a growing metropolis of 100,000 inhabitants rife with the unrest of rapid expansion, ethnic rivalry, revolutionary agitation, and anti-Semitism -- with full force. The resulting massacre left dozens dead, and hundreds wounded, maimed, widowed, orphaned or homeless.
This is the story of Kishinev. In this extensively researched book, Edward Judge examines these anti-Jewish riots, detailing their background, cause, and aftermath. He traces the evolution of the riots, analyzing the broader impact of imperial policies, urbanization, nationalism, population growth, and revolutionary activism upon the Jewish situation in Russia. Recounting the activities and attitudes of anti- semitic agitators and Kishinev officials, the book examines the spiral of violence, the inaction of the authorities in the wake of the pogrom, the storm of indignation that followed the pogrom, and the efforts of tsarist officials to counter subsequent negative publicity. EASTER IN KISHINEV also portrays the investigation of the disorders and the trials of the rioters and carefully considers the question of government responsibility for the outbreak of the pogrom.

EDWARD H. JUDGE is Professor of History at Le Moyne College and author of Plehve: Repression and Reform in Imperial Russia, 1902-1904, which won the American Historical Association's First Book Award.