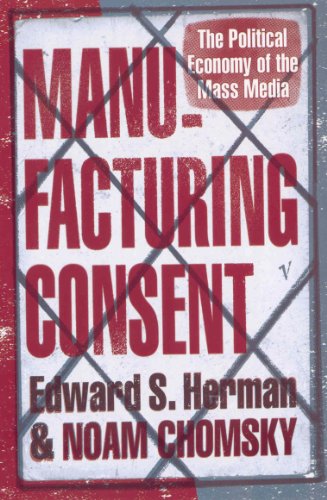 In Stock
$133.99
Contrary to the usual image of the press as cantankerous, obstinate, and ubiquitous in its search for truth, Edward Herman and Noam Chomsky depict how an underlying elite consensus largely structures all facets of the news.
Like New Very Good
Only 1 left

Manufacturing Consent: The Political Economy of the Mass Media by Noam Chomsky

Contrary to the usual image of the press as cantankerous, obstinate, and ubiquitous in its search for truth, Edward Herman and Noam Chomsky depict how an underlying elite consensus largely structures all facets of the news. They skilfully dissect the way in which the marketplace and the economics of publishing significantly shape the news. They reveal how issues are framed and topics chosen, and contrast the double standards underlying accounts of free elections, a free press, and governmental repression between Nicaragua and El Salvador; between the Russian invasion of Afghanistan and the American invasion of Vietnam; between the genocide in Cambodia under a pro-American government and genocide under Pol Pot. What emerges from this groundbreaking work is an account of just how propagandistic our mass media are, and how we can learn to read them and see their function in a radically new way.

"[A] compelling indictment of the news media's role in covering up errors and deceptions in American foreign policy of the past quarter century."--Walter LaFeber, The New York Times Book Review

Edward S. Herman is Professor of Finance at the Wharton School of the University of Pennsylvania. Among his books are Corporate Control, Corporate Power; The Real Terror Network: Terrorism in Fact and Propaganda; Demonstration Elections: U. S.-Staged Elections in the Dominican Republic, Vietnam and El Salvador (with Frank Brodhead) and The Rise and Fall of the Bulgarian Connection (with Frank Brodhead).

Noam Chomsky is Institute Professor in the Department of Linguistics and Philosophy at the Massachusetts Institute of Technology, Boston. A member of the American Academy of Science, he has published widely in both linguistics and current affairs. His previous books include At War with Asia, American Power and the New Mandarins, For Reasons of State, Peace in the Middle East?, Towards a New Cold War, Fateful Triangle: The U. S., Israel and the Palestinians, Pirates and Emperors, The Culture of Terrorism, and Necessary Illusions.

GOR008718590
Manufacturing Consent: The Political Economy of the Mass Media by Noam Chomsky
Noam Chomsky
Used - Like New
Paperback
Vintage Publishing
1995-02-07
432
0099533111
9780099533115
N/A
Book picture is for illustrative purposes only, actual binding, cover or edition may vary.
The book has been read, but looks new. The book cover has no visible wear, and the dust jacket is included if applicable. No missing or damaged pages, no tears, possible very minimal creasing, no underlining or highlighting of text, and no writing in the margins.