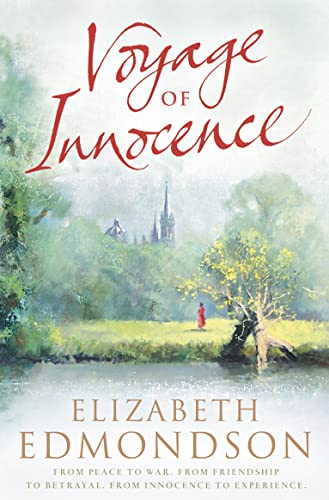 Voyage of Innocence
by Elizabeth Edmondson

From the author of THE FROZEN LAKE comes an enthralling novel of love, betrayal and idealism, as three very different young women go up to Oxford in the years immediately before World War Two.

Voyage of Innocence by Elizabeth Edmondson

From the author of THE FROZEN LAKE comes an enthralling novel of love, betrayal and idealism, as three very different young women go up to Oxford in the years immediately before World War Two.

Vee - the clergyman's daughter. Boyish, alluring, she plans to use her time at Oxford to put right everything that went wrong in her loveless childhood. Her friendship with Alfred introduces her to politics and the subversive attractions of secret societies; it will lead to her career as a secret agent, but at what cost to old loyalties and her true feelings?

Claudia, radiant, intense, aristocratic, is equally drawn to the secret society and one member in particular; his dazzling influence will see her travel to Berlin and come under the spell of Fascism as war looms.

And Lally, glamorous daughter of an Irish-American senator, is sceptical of the society and the arguments from both sides. Her own choices will bring her into Vee's new life, with all its dangers and betrayals. As the world becomes embroiled in the events of war, what price personal values, losses and loves?

Praise for Voyage of Innocence:
`I loved it.' Woman

`A very interesting book, not only because it gives a flavour of life in the thirties...it's a way of imbibing history.' Oxford Times

`Well written and superbly researched...a thoroughly enjoyable read. A must.' Yours

Praise for The Frozen Lake:
`Charming.' The Bookseller

`Dark family secrets, long buried,if not forgotten, bubble to the surface. A novel that is vivid and engrossing.' Choice

Elizabeth Edmondson was born in Chile and educated in Calcutta and London before going to Oxford University. Her novels include The Villa in Italy, The Villa on the Riviera, Voyage of Innocence and The Frozen Lake, which have been translated into several languages.

GOR001226288
Voyage of Innocence by Elizabeth Edmondson
Elizabeth Edmondson
Used - Very Good
Paperback
HarperCollins Publishers
2005-12-26
430
0007184883
9780007184880
N/A
Book picture is for illustrative purposes only, actual binding, cover or edition may vary.
This is a used book - there is no escaping the fact it has been read by someone else and it will show signs of wear and previous use. Overall we expect it to be in very good condition, but if you are not entirely satisfied please get in touch with us.