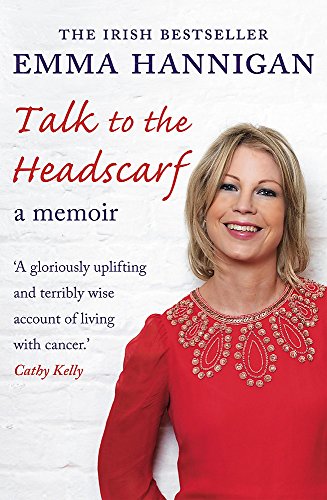 Talk to the Headscarf
by Emma Hannigan

'A gloriously uplifting and terribly wise account of living with cancer.' Cathy Kelly

Talk to the Headscarf Summary

Emma Hannigan was thirty-two and married with two small children when she found out that she had an 85 per cent chance of developing cancer.
Over the following year she had a double mastectomy and both ovaries removed, reducing her cancer risk to five per cent.
But then her worst fears were realised.
Cancer struck anyway.
Talk to the Headscarf is the story of how she lived, laughed and overcame some of the toughest times in her life.
Emma has now battled cancer eight times. In this inspirational account, she shares with us the highs and lows of her astounding story and shows us that, against the odds, life can and does carry on.

Customer Reviews - Talk to the Headscarf

Talk to the Headscarf Reviews

'Inspirational...and unmissable' * U magazine *
'An unusual and powerfully upbeat memoir...Talk to the Headscarf is a meditation about life, not death.' * Irish Independent *
'An extraordinary story' * Ryan Tubridy *
'A gloriously uplifting and terribly wise account of living with cancer.' * Cathy Kelly *
'So honest, so darkly humourous, so miraculously positive, and - above all - really... funny...Anyone who knows someone with cancer; is undergoing treatment themselves; or just fancies keeping themselves abreast (pun partially intended) of what happens to "one in three" people, should most definitely give Talk to the Headscarf the time it readily deserves' * Sheena McGinley, entertainment.ie *

Emma Hannigan was the beloved and bestselling author of thirteen novels, including the No.1 bestseller Letters to My Daughters. Her bestselling memoir Talk to the Headscarf was updated and revised as All To Live For: Fighting Cancer. Finding Hope. In 2007 Emma was diagnosed with breast cancer and her eleven-year battle with cancer began. As an ambassador for Breast Cancer Ireland Emma worked to dispel the fears around cancer and spread hope about new treatments. In February 2018 Emma shared that her team of dedicated doctors had exhausted all avenues in terms of her treatment. She launched a social media campaign #HelpEmmaHelpOthers to raise EURO100,000 for Breast Cancer Ireland. Two weeks later, shortly before her death, Emma's target had been reached. In the final months of her life, Emma completed her thirteenth novel, The Gift of Friends, sending her acknowledgements to her editor just days before she passed away.

GOR003565852
Talk to the Headscarf: Fighting Cancer. Finding Hope. by Emma Hannigan
Emma Hannigan
Used - Very Good
Paperback
Hachette Books Ireland
2011-09-01
416
1444725920
9781444725926
N/A
Book picture is for illustrative purposes only, actual binding, cover or edition may vary.
This is a used book - there is no escaping the fact it has been read by someone else and it will show signs of wear and previous use. Overall we expect it to be in very good condition, but if you are not entirely satisfied please get in touch with us.