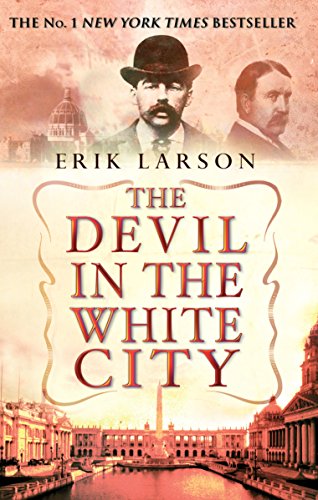 The Devil In The White City
by Erik Larson

Out of Stock
$13.39
The Chicago World's Fair of 1893 and its amazing 'White City' was one of the wonders of the world. Burnham, the driving force behind the White City, the massive, visionary landscape of white buildings set in a wonderland of canals and gardens.
Very Good
Only 0 left

The Devil In The White City Summary

The Devil In The White City by Erik Larson

The Chicago World's Fair of 1893 and its amazing 'White City' was one of the wonders of the world. This is the incredible story of its realization, and of the two men whose fates it linked: one was an architect, the other a serial killer. The architect was Daniel H. Burnham, the driving force behind the White City, the massive, visionary landscape of white buildings set in a wonderland of canals and gardens. The killer was H. H. Holmes, a handsome doctor with striking blue eyes. He used the attraction of the great fair - and his own devilish charms - to lure scores of young women to their deaths. While Burnham overcame politics, infighting, personality clashes and Chicago's infamous weather to transform the swamps of Jackson Park into the greatest show on Earth, Holmes built his own edifice just west of the fairground. He called it the World's Fair Hotel. In reality it was a torture palace, a gas chamber, a crematorium. These two disparate but driven men together with a remarkable supporting cast of colourful characters, including as Buffalo Bill, George Ferris, Thomas Edison and some of the 27 million others who converged on the dazzling spectacle of the White City, are brought to life in this mesmerizing, murderous tale of the legendary Fair that transformed America and set it on course for the twentieth century.

The Devil In The White City Reviews

"Fuses history and entertainment to give the dramatic effect of a novel...this truth really is stranger than fiction" * The New York Times *
"Erik Larson tracks [H H Holmes] with practised journalistic skill...Highly readable" * Sunday Telegraph *
"Captures the spirit of an America bursting with pioneering drive...a gripping book" * Independent on Sunday *
"An irresistible page-turner that reads like the most compelling, sleep defying fiction" * Time Out *
"Bursting with so much vitality you half expect it to jump right out of your hands" * Yorkshire Evening Post *

Erik Larson is a prize-winning journalist and No.1 bestselling author of Isaac's Storm, The Devil in the White City, Thunderstruck, In the Garden of Beasts and in 2015, Dead Wake - about the sinking of the Lusitania in 1915. He lives in Seattle with his family.

GOR001225109
The Devil In The White City by Erik Larson
Erik Larson
Used - Very Good
Paperback
Transworld Publishers Ltd
2004-04-01
496
0553813536
9780553813531
N/A
Book picture is for illustrative purposes only, actual binding, cover or edition may vary.
This is a used book - there is no escaping the fact it has been read by someone else and it will show signs of wear and previous use. Overall we expect it to be in very good condition, but if you are not entirely satisfied please get in touch with us.