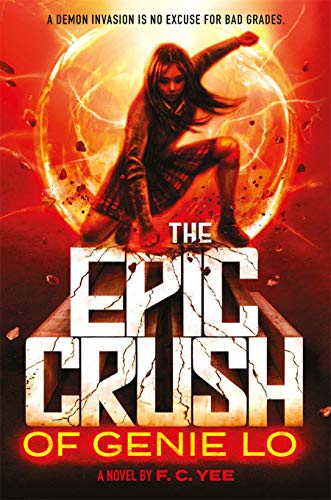 Used Price
$10.69
Free Shipping in the US
"The struggle to get into a top-tier college consumes sixteen-year-old Genie's every waking thought. But when she discovers she's a celestial spirit who's powerful enough to bash through the gates of heaven with her fists, her perfectionist existence is shattered"--Publisher's description.
Reviews:
Trustpilot
Very Good

She annihilates standardized tests and the bad guys. Genie Lo is one among droves of Ivy-hopeful overachievers in her sleepy Bay Area suburb. You know, the type who wins. When she's not crushing it at volleyball or hitting the books, Genie is typically working on how to crack the elusive Harvard entry code. But when her hometown comes under siege from Hellspawn straight out of Chinese folklore, her priorities are dramatically rearranged. Enter Quentin Sun, a mysterious new kid in class who becomes Genie's self-appointed guide to battling demons. While Genie knows Quentin only as an attractive transfer student with an oddly formal command of the English language, in another reality he is Sun Wukong, the mythological Monkey King incarnate right down to the furry tail and penchant for peaches. Suddenly, acing the SATs is the least of Genie's worries. The fates of her friends, family, and the entire Bay Area all depend on her summoning an inner power that Quentin assures her is strong enough to level the very gates of Heaven. But every second Genie spends tapping into the secret of her true nature is a second in which the lives of her loved ones hang in the balance.

**STARRED REVIEW**
"In this dazzlingly fun debut, Yee mixes humor, Chinese folklore, and action to deliver a rousing, irreverent adventure packed with sharp-edged banter."--Publishers Weekly
**STARRED REVIEW**
"A tough, self-disciplined Chinese-American teen deals with the supernatural derailing of her college-prep activities in this speculative fiction novel that draws on the folklore of the Chinese Monkey King... An exciting, engaging, and humorous debut that will appeal widely, this wraps up neatly enough but leaves an opening for further installments--here's hoping."--Kirkus
**STARRED REVIEW**
"Genie's perspective on the strange turn her life has taken will have readers laughing out loud...Hilarious and action-packed, this fantastically executed tale of the Monkey King in modern-day California introduces a great new character in Genie Lo."--School Library Journal
**STARRED REVIEW**
"...Yee builds a world filled with characters that carry the page-turning plot... presented in a distinctive way, combined with Yee's vivid action scenes that take place in a familiar setting, will send readers searching for more tales about Sun Wukong."-- (09/22/2017)

Christian Yee grew up in New Jersey and studied Economics at Brown. For his debut novel, he drew inspiration from the best and wisest people in his life. Outside of writing, he practices capoeira, a Brazilian form of martial arts. He currently calls the San Francisco Bay Area home.