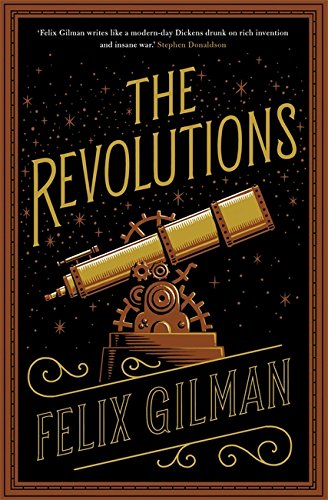 The Revolutions
by Felix Gilman

Used Price
$9.69
Free Shipping in the US
From the author of The Half-Made World and The Rise of Ransom City, a sweeping stand-alone tale of Victorian science fiction, arcane exploration, and planetary romance.
Reviews:
Trustpilot
Very Good Good

The Revolutions by Felix Gilman

THE REVOLUTIONS is a fantasy of the occult scene in fin de siecle London, the celestial spheres, and mystical Martian exploration. It follows two young lovers separated by the schemes and blundering of rival occultists, from the drawing rooms of spiritualist societies, through shady enterprises in Deptford warehouses, and magical war on the Isle of Dogs, and out to a hallucinatory, doomed Mars drawn from the fantasies of Edgar Rice Burroughs, the imaginings of Aleister Crowley, and the speculations of Victorian astronomers.

"[Gilman] takes the brutality of the wild west and twists it into an epic fantasy that left me staggered. It brings the sense of wonder back to fantasy by creating a complex and visceral world unlike anything I've read... stunning." Mary Robinette Kowal, author of Shades of Milk and Honey

"Refreshingly unlike any other novel I've read. Felix Gilman writes like a modern-day Dickens drunk on rich invention and insane war." Stephen Donaldson, author of The Chronicles of Thomas Covenant

"A fantasy that Mark Twain would have been proud to write...Never has fantasy been darker, cleverer, more sly, or more touching in its refraction of our own world. I scratch my head in awe." Francis Spufford, author of Red Plenty

"Gilman is one of the essential modern fantasists, and his latest book lives up to the expectations generated by his previous successes." Benjamin Wald, SF Revu

"Like The Half-Made World that came before it, The Rise of Ransom City brings us a re-imagined tale of America's Old West, mixing steampunk and magic realism to great effect." Kirkus Reviews

"Felix Gilman has a sly wit and an assured hand. He is a fresh and original voice in fantasy." Lavie Tidhar, author of Osama

"Vivid and accurate prose, a gripping, imaginative story, a terrifically inventive setting, a hard-bitten, indestructible hero, and an intelligent, fully adult heroine---we haven't had a science-fiction novel like this for a long time." Ursula K. Le Guin

Born in London in 1974, Felix Gilman now lives on the Upper West Side of New York, with his wife, child, cat, and lots of books. His novel Thunderer was nominated for the 2009 Locus Award for Best First Novel, and earned him a nomination for the John W. Campbell Award for Best New Writer in both 2009 and 2010. He is also the author of The Half-Made World and The Rise of Ransom City.

GOR006315203
The Revolutions by Felix Gilman
Felix Gilman
Used - Very Good
Paperback
Little, Brown Book Group
2014-09-18
480
1472113276
9781472113276
N/A
Book picture is for illustrative purposes only, actual binding, cover or edition may vary.
This is a used book - there is no escaping the fact it has been read by someone else and it will show signs of wear and previous use. Overall we expect it to be in very good condition, but if you are not entirely satisfied please get in touch with us.