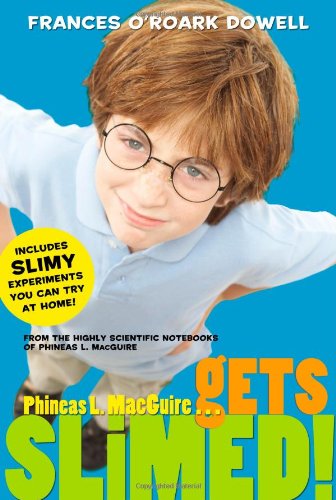 Used Price
$12.69
Free Shipping in the US
When his new best friend, Ben, decides to run for class president, fourth-grade science whiz Phineas MacGuire reluctantly agrees to be his campaign manager in exchange for help with his latest experiment--cultivating exhibits for a mold museum.
Reviews:
Trustpilot
Good

Phineas L. MacGuire--a.k.a. Mac--aims to be the best fourth-grade scientist ever. It's a tall order, but he's confident that he can achieve his goal, especially since Aretha has asked him to help her earn a Girl Scout badge by creating the mold that produces penicillin. How many fourth graders can say they've reproduced penicillin? None, as far as Mac knows. And who knows more about mold than Mac? But soon Mac is busy managing Ben's campaign for class president and dealing with his weird new babysitter. How can he focus on mold?

Frances O'Roark Dowell is the bestselling and critically acclaimed author of Dovey Coe, which won the Edgar Award and the William Allen White Award; Where I'd Like to Be; The Secret Language of Girls and its sequels The Kind of Friends We Used to Be and The Sound of Your Voice, Only Really Far Away; Chicken Boy; Shooting the Moon, which was awarded the Christopher Medal; the Phineas L. MacGuire series; Falling In; the critically acclaimed The Second Life of Abigail Walker; Anybody Shining; Ten Miles Past Normal; Trouble the Water; the Sam the Man series; and The Class. She lives with her family in Durham, North Carolina. Connect with Frances online at FrancesDowell.com.

Preston McDaniels is the illustrator of the Phineas L. MacGuire series and Cynthia Rylant's Lighthouse Family series. He lives in Aurora, Nebraska, with his wife and two daughters.

GOR009513882
Phineas L. MacGuire . . . Gets Slimed! by Frances O'Roark Dowell
Frances O'Roark Dowell
From the Highly Scientific Notebooks of Phineas L. MacGuire
Used - Good
Paperback
Simon & Schuster
2010-06-22
224
141699775X
9781416997757
N/A
Book picture is for illustrative purposes only, actual binding, cover or edition may vary.
The book has been read but remains in clean condition. All pages are intact and the cover is intact. Some minor wear to the spine.