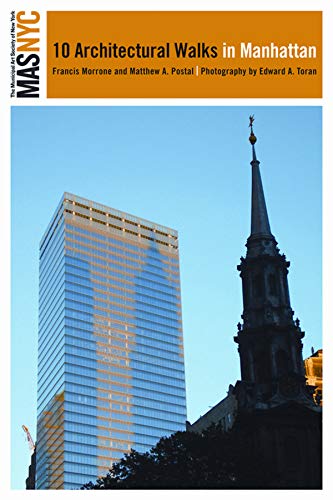 The Municipal Art Society of New York
by Francis Morrone

"The MAS's expertise in conducting tours is highly evident; the book provides extraordinarily precise directions on where to walk, where to look up and when to turn around. The text, by architectural tour guide Francis Morrone and architectural historian Matthew A. Postal, is rich without being overly dense, and striking high-resolution photography by Edward A. Toran makes the volume useful to armchair travelers as well." -- Modernism
"References to other buildings are thoughtfully keyed, aware of the manner in which a book allows for the walking tour to devolve into something more personal, less scripted....It furthers [the MAS] mission of celebrating the city's many layers and appreciating them firsthand." -- John Hill - Archidose.org
"The book is a suitable gift for out-of-town visitors or city residents, and it could serve as the basis for a group excursion, if you're looking for a cheaper, D.I.Y. approach to teambuilding." -- BizBash

Francis Morrone is an art and architecture critic who writes book reviews, film criticism, and design criticism for many publications. He has written architectural guides to Philadelphia and New York City. He lives in Brooklyn, New York. He is also the recipient of the 2012 Arthur Ross Award in History/Journalism, given by The Institute of Classical Architecture & Art (ICAA). Matthew A. Postal is an architectural historian, specializing in twentieth century architecture and urbanism. Robin Lynn conceived and edited 10 Architectural Walks in Manhattan by Francis Morrone and Matthew Postal (W.W. Norton & Company, 2009), and co-authored A Walking Tour of Cast Iron Architecture in SoHo with Margot Gayle (Friends of Cast Iron Architecture, 1983; second edition, Victorian Society New York on behalf of Friends of Cast Iron Architecture, 2011). She organized architectural walking tours for the Municipal Art Society for over ten years. Robin teaches English and New York City history to new New Yorkers at the College of Mt. St. Vincent's Center for Immigrant Studies and Columbia University's Community Impact program.

GOR002503697
The Municipal Art Society of New York: 10 Architectural Walks in Manhattan by Francis Morrone
Francis Morrone
Used - Very Good
Paperback
WW Norton & Co
2009-06-22
304
0393732576
9780393732573
N/A
Book picture is for illustrative purposes only, actual binding, cover or edition may vary.
This is a used book - there is no escaping the fact it has been read by someone else and it will show signs of wear and previous use. Overall we expect it to be in very good condition, but if you are not entirely satisfied please get in touch with us.