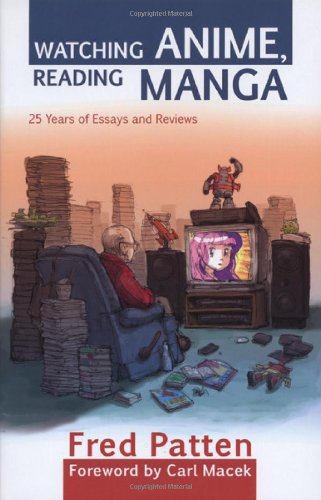 Out of Stock
$23.99
The first book-length collection by the most respected writer on anime and manga today
Very Good
Only 0 left

Anime's influence can be found in every corner of American media, from film and television to games and graphic arts. And Fred Patten is largely responsible. He was reading "manga" and watching "anime" before most of the current generation of fans was born. In fact, it was his active participation in fan clubs and his prolific magazine writing that helped create a market and build American "anime" fandom into the vibrant community it is today. "Watching Anime, Reading Manga" gathers together a quarter-century of Patten's lucid observations on the business of "anime," fandom, artists, Japanese society and the most influential titles. Illustrated with original fanzine covers and archival photos. Foreword by Carl Macek ("Robotech").

"Watching Anime, Reading Manga is a worthwhile addition to your library; it makes good bathroom browsing, cover-to-cover reading, and a worthwhile reference for writing or researching anime and manga, not to mention a window into the history of fandom in the United States." -- "SF Site"

"Fred Patten is an acknowledged authority on manga and anime in the United States, having been an active part of its fandom decades before it became mainstream. Fred's writings give a unique insider's view into this fascinating genre." -- Stan Sakai, writer and artist of "Usagi Yojimbo

Fred Patten was an anime fan before most of this generation of fans were born, back when color television was a novelty and the idea of playing back TV shows on tapes and discs was a science fiction fantasy. Actually, Patten was a big part of the science fiction and fantasy world before he was drawn into anime fandom in the mid-1970's. He remains active in the animation industry with Streamline Pictures. Patten is best known for his writings on anime history. This is his first collection.

GOR001523889
Watching Anime, Reading Manga by Fred Patten
Fred Patten
Used - Very Good
Paperback
Stone Bridge Press
2004-08-01
360
1880656922
9781880656921
N/A
Book picture is for illustrative purposes only, actual binding, cover or edition may vary.
This is a used book - there is no escaping the fact it has been read by someone else and it will show signs of wear and previous use. Overall we expect it to be in very good condition, but if you are not entirely satisfied please get in touch with us.