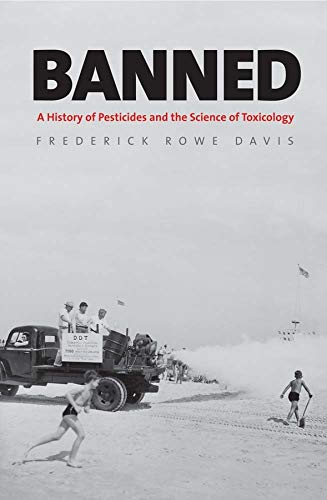 Used Price
$10.99
Free Shipping in the US
Silent Spring catalyzed an environmental movement in the 1960s and achieved a ban on DDT, but are the alternatives any less toxic?
Reviews:
Trustpilot
Very Good

Banned: A History of Pesticides and the Science of Toxicology by Frederick Rowe Davis

Silent Spring catalyzed an environmental movement in the 1960s and achieved a ban on DDT, but are the alternatives any less toxic?

Rachel Carson's eloquent book Silent Spring stands as one of the most important books of the twentieth century and inspired important and long-lasting changes in environmental science and government policy. Frederick Rowe Davis thoughtfully sets Carson's study in the context of the twentieth century, reconsiders her achievement, and analyzes its legacy in light of toxic chemical use and regulation today.

Davis examines the history of pesticide development alongside the evolution of the science of toxicology and tracks legislation governing exposure to chemicals across the twentieth century. He affirms the brilliance of Carson's careful scientific interpretations drawing on data from university and government toxicologists. Although Silent Spring instigated legislation that successfully terminated DDT use, other warnings were ignored. Ironically, we replaced one poison with even more toxic ones. Davis concludes that we urgently need new thinking about how we evaluate and regulate pesticides in accounting for their ecological and human toll.

"This is a fundamentally important, up-to-date analysis of environmental toxicology after Silent Spring. It is simultaneously nuanced and forceful in its arguments."-Daniel Lewis, Huntington Library -- Daniel Lewis
"Banned's emphasis on the development of toxicology is unique, compelling, and convincing. It is also crucial for understanding how Silent Spring was constructed, the controversy that swirled around its publication, and the impact it had on pesticide regulation in the United States."-Mark V. Barrow, Jr., author of Nature's Ghosts: Confronting Extinction from the Age of Jefferson to the Age of Ecology -- Mark V. Barrow, Jr.
"Banned is an excellent and much-needed history of pesticides. Davis provides a compelling analysis of the ways policymakers understand risk. Most important, he offers a useful ecological alternative to current risk calculations. Toxicologists, policymakers, and historians will benefit from this clearly-written book."-Nancy Langston, author of Toxic Bodies: Hormone Disruptors and the Legacy of DES -- Nancy Langston
"Th[is] richly researched and well-written stud[y] provide[s] many new insights for scholars as well as important applications for policymakers to address ongoing ecological challenges."-David D. Vail, Studies in History and Philosophy of Biological and Biomedical Sciences -- David D. Vail * Studies in History and Philosophy of Biological and Biomedical Sciences *

Frederick Rowe Davis is associate professor of history at Florida State University. A lifelong birder and naturalist, he is author of The Man Who Saved Sea Turtles. He lives with his son in Tallahassee, Florida.

CIN000405801
Banned: A History of Pesticides and the Science of Toxicology by Frederick Rowe Davis
Frederick Rowe Davis
Used - Very Good
Hardback
Yale University Press
2015-01-06
288
0300205171
9780300205176
N/A
Book picture is for illustrative purposes only, actual binding, cover or edition may vary.
This is a used book - there is no escaping the fact it has been read by someone else and it will show signs of wear and previous use. Overall we expect it to be in very good condition, but if you are not entirely satisfied please get in touch with us.