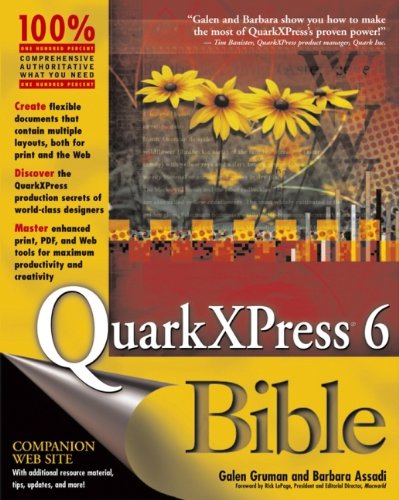 Used Price
$15.49
Free Shipping in the US
This reference to QuarkXPress explains through visual examples how to use the layout programme in the context of real work.
Reviews:
Trustpilot
Very Good Good

* Cross-platform coverage for Mac and Windows versions; covers the long-awaited upgrade of QuarkXPress, which will be compatible with Mac OS X
* Written from the perspective of the real-world designer or production specialist, this book uses visual examples to explain how to use the program in the context of real work
* Addresses all significant aspects of QuarkXPress, including color print-ing, online publishing, workflow considerations, cross-platform exchange, source file preparation, printed output, and much more
* Covers new features and tools for publishing to print, Web, and mobile devices
* Includes a Quick Start section to get readers up and running by creating an actual project, plus an all-new tear-out reference card
* QuarkXPress has been by far the world's leading page composition tool since the early 1990s, with an installed base estimated at more than three million

Galen Gruman is principal at The Zango Group, an editorial and marketing consulting firm, and senior editorial associate at BayCreative, a creative consultancy, as well as editorial director at EmergeMedia, publisher of IT Wireless. He has also been editor of Macworld and M-Business, executive editor of Upside, West Coast bureau chief of Computerworld, and vice president of content for ThirdAge.com. He is coauthor of 13 other books on desktop publishing. He led one of the first successful conversions of a national magazine to desktop publishing in 1986 and has covered publishing technology since then for several publications, including the trade weekly InfoWorld, for which he began writing in 1986, and Macworld, whose staff he joined in 1991. Originally a newspaper reporter in Los Angeles, Gruman got caught by the production-technology bug in 1979 and hasn't recovered.

Barbara Assadi is a principal at BayCreative LLC, a San Francisco-based marketing and advertising agency that develops custom publishing, marketing, and advertising collateral and services for a wide range of companies. Prior to cofounding that company, she was creative programs manager at Oracle Corporation, where she managed the creation, design, and production of the company's annual report and product marketing collateral. She previously held similar positions at Quark and Pacific Life Insurance, and also served as manager of Macworld's online and syndicated content. She was an early pioneer in desktop publishing technology, especially as applied to corporate communications, and evaluated publishing tools for the trade weekly InfoWorld from 1988 to 1996. Assadi has cowritten eight other books on QuarkXPress and has edited others on similar topics.

GOR001563663
Quarkxpress 6 Bible by Galen Gruman
Galen Gruman
Used - Very Good
Paperback
John Wiley & Sons Inc
2003-07-29
1008
0764541153
9780764541155
N/A
Book picture is for illustrative purposes only, actual binding, cover or edition may vary.
This is a used book - there is no escaping the fact it has been read by someone else and it will show signs of wear and previous use. Overall we expect it to be in very good condition, but if you are not entirely satisfied please get in touch with us.