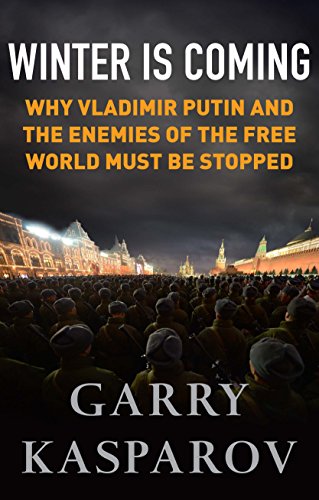 Winter Is Coming
by Garry Kasparov

Used Price
$15.99
Free Shipping in the US
The stunning story of Russia's slide back into a dictatorship - and how the West is now paying the price for allowing it to happen.
Reviews:
Trustpilot
Very Good

Winter Is Coming: Why Vladimir Putin and the Enemies of the Free World Must Be Stopped by Garry Kasparov

The ascension of Vladimir Putin - a former lieutenant colonel of the KGB - to the presidency of Russia in 1999 was a strong signal that the country was headed away from democracy. Yet in the intervening years - as America and the world's other leading powers have continued to appease him - Putin has grown not only into a dictator but an international threat. With his vast resources and nuclear arsenal, Putin is at the centre of a worldwide assault on political liberty and the modern world order.

For Garry Kasparov, none of this is news. He has been a vocal critic of Putin for over a decade, even leading the pro-democracy opposition to him in the farcical 2008 presidential election. Yet years of seeing his Cassandra-like prophecies about Putin's intentions fulfilled have left Kasparov with a darker truth: Putin's Russia, like ISIS or Al Qaeda, defines itself in opposition to the free countries of the world.

As Putin has grown ever more powerful, the threat he poses has grown from local to regional and finally to global. In this urgent book, Kasparov shows that the collapse of the Soviet Union was not an endpoint - only a change of seasons, as the Cold War melted into a new spring. But now, after years of complacency and poor judgement, winter is once again upon us.

Argued with the force of Kasparov's world-class intelligence, conviction and hopes for his home country, Winter Is Coming reveals Putin for what he is: an existential danger hiding in plain sight.

The main target of this brave, trenchant and convincing book is not the thuggish and dangerous regime that misrules Russia, but the cowardly wishful thinking in the West that refuses to stop it... The book ably summarises the many other alarm calls the West has missed... Let us hope that Kasparov's book becomes a bestseller -- Edward Lucas * The Times *
In this punchy polemic, Kasparov reflects on how far the world has gone from the heady "end of history" days of the early 1990s to what some see as the advent of a new Cold War... Kasparov's moral clarity is admirable and informed by personal experience. -- Peter Conradi * Sunday Times *
Ferocious and unforgiving... This is a book that should be read by every policymaker dealing with Russia (or any other autocracy) -- John Thornhill * Financial Times *
A compelling story of courage... Winter Is Coming presents a picture of the internal forces propelling Russia's descent into aggressive authoritarianism. And it offers a scathing analysis of the contribution of the West to that outcome. * Wall Street Journal *
It's always important to read Garry Kasparov, who warned of the dangers of Putinism long before so many others. He is that rare thing: A Russian democrat who is realistic about his country, but remains hopeful for the future. * Anne Applebaum, Pulitzer Prize-winning author of Gulag and Iron Curtain *
Garry Kasparov has the information-processing capacity of a supercomputer and the eloquence of an extraordinary orator. It takes a mind and a heart like his to analyze the last twenty-five years of the history of Russia in the world and emerge with not only an indictment of Western complicity but a clear call for Western action. * Masha Gessen, author of Man Without a Face and Words Will Break Cement *
Garry Kasparov is a mastermind in chess and politics, and he understands the evil of the Putin regime better than anyone. This book is a clear and accurate observation of the mess we are in due to the West's inaction towards Putin, and a stark warning of what will happen if we fail to act in the future. It should be required reading for every head of state and their electorate. * Bill Browder, author of Red Notice *
Garry Kasparov has written a passionate indictment both of Russia's kleptocracy and the complacency of Western democracies in the face of Putin. This threat has become our central foreign policy challenge, and Kasparov's arguments are essential in understanding how to face it. * Francis Fukuyama *

Garry Kasparov spent twenty years as the world's #1 ranked chess player. In 2005, he retired from professional chess to lead the pro-democracy opposition against Vladimir Putin, from street protests to coalition building. In 2012, he was named chairman of the Human Rights Foundation, succeeding Vaclav Havel. He has been a contributing editor to the Wall Street Journal since 1991 and is a senior visiting fellow at the Oxford Martin School. His 2007 book, How Life Imitates Chess, has been published in twenty-six languages. He lives in self-imposed exile in New York with his wife Dasha and their children.

GOR007079213
Winter Is Coming: Why Vladimir Putin and the Enemies of the Free World Must Be Stopped by Garry Kasparov
Garry Kasparov
Used - Very Good
Hardback
Atlantic Books
2015-10-21
320
1782397868
9781782397861
N/A
Book picture is for illustrative purposes only, actual binding, cover or edition may vary.
This is a used book - there is no escaping the fact it has been read by someone else and it will show signs of wear and previous use. Overall we expect it to be in very good condition, but if you are not entirely satisfied please get in touch with us.