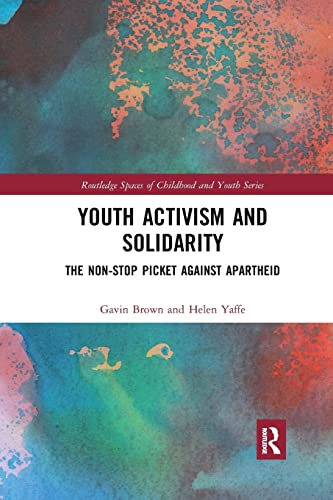 Youth Activism and Solidarity: The non-stop picket against Apartheid by Gavin Brown (University of Leicester, UK)

From April 1986 until just after Nelson Mandela's release from prison in February 1990, supporters of the City of London Anti-Apartheid Group maintained a continuous protest, day and night, outside the South African Embassy in central London. This book examines how and why a group of children, teenagers and young adults made themselves 'non-stop against apartheid', creating one of the most visible expressions of anti-apartheid solidarity in Britain.

Drawing on interviews with over ninety former participants in the Non-Stop Picket of the South African Embassy and extensive archival research using previously unstudied documents, this book offers new insights to the study of social movements and young people's lives. It theorises solidarity and the processes of adolescent development as social practices to provide a theoretically-informed, argument-led analysis of how young activists build and practice solidarity.

Youth Activism and Solidarity: The Non-Stop Picket Against Apartheid will be of interest to geographers, historians and a wide range of other social scientists concerned with the historical geography of the international anti-apartheid movement, social movement studies, contemporary British history, and young people's activism and geopolitical agency.

'The book provides a detailed account of the activity of the non-stop picket, from the comparatively large-scale or spectacular events,to the "mundane, possibly boring, aspects of political activism. Part of the importance of Youth Activism and Solidarity is that the care and detail with which the non-stop picket is recounted gives those of us who were not there a real sense of what it was like, allowing us to learn some of the lessons of that campaign and, hopefully, to more effectively and equitably organise solidarity in new contexts.'
Diarmaid Kelliher, Antipode, January 2018

Gavin Brown is an Associate Professor in the School of Geography, Geology and the Environment at the University of Leicester, UK. He is a cultural, historical and political geographer with an interest in protest movements, solidarity, and the geopolitics of sexual orientation and gender identity. Helen Yaffe is a Lecturer in Economic and Social History at the University of Glasgow. She has focussed on Cuban economic history, political economy, Latin American development and the history of economics.

2. A non-stop protest in a non-stop world

4. Being non-stop against apartheid

5. Defending the right to protest

7: Growing up through protest

GOR010721577
Youth Activism and Solidarity: The non-stop picket against Apartheid by Gavin Brown (University of Leicester, UK)
Gavin Brown (University of Leicester, UK)
Routledge Spaces of Childhood and Youth Series
Used - Very Good
Paperback
Taylor & Francis Ltd
2019-02-07
260
036721895X
9780367218959
N/A
Book picture is for illustrative purposes only, actual binding, cover or edition may vary.
This is a used book - there is no escaping the fact it has been read by someone else and it will show signs of wear and previous use. Overall we expect it to be in very good condition, but if you are not entirely satisfied please get in touch with us.