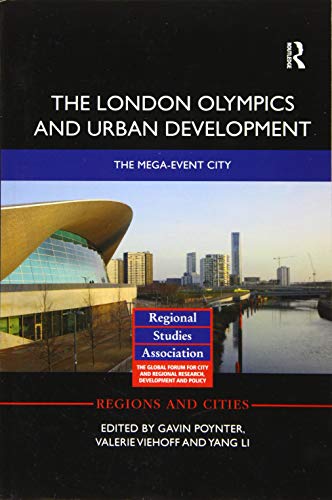 The London Olympics and Urban Development
by Gavin Poynter

The London Olympics and Urban Development: The Mega-Event City by Gavin Poynter

As London sought to use the Olympics to achieve an ambitious programme of urban renewal in the relatively socially deprived East London it attracted global attention and sparked debate. This book provides an in-depth study of the transformation of East London as a result of the 2012 Summer Olympic and Paralympic Games. Government and event organisers use legacies of urban renewal to justify hosting the world's leading sports mega-event, this book examines and evaluates those legacies.

The London Olympics and Urban Development: the mega-event city is composed of new research, conducted by academics and policy makers. It combines case study analysis with conceptual insight into the role of a sports mega-events in transforming the city. It critically assesses the narrative of legacy as a framework for legitimizing urban changes and examines the use of this framework as a means of evaluating the outcomes achieved.

This book is about that process of renewal, with a focus on the period following the 2012 Games and the diverse social, political and cultural implications of London's use of the narrative of legacy.

GOR010068662
The London Olympics and Urban Development: The Mega-Event City by Gavin Poynter
Gavin Poynter
Regions and Cities
Used - Very Good
Paperback
Taylor & Francis Ltd
2018-08-14
362
113836391X
9781138363915
N/A
Book picture is for illustrative purposes only, actual binding, cover or edition may vary.
This is a used book - there is no escaping the fact it has been read by someone else and it will show signs of wear and previous use. Overall we expect it to be in very good condition, but if you are not entirely satisfied please get in touch with us.