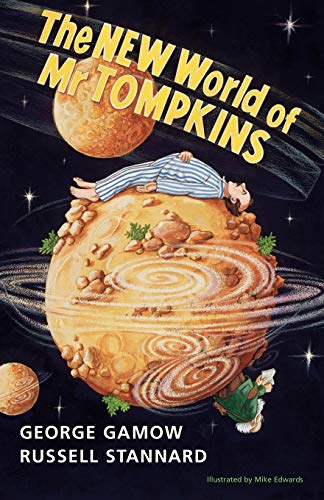 The New World of Mr Tompkins
by George Gamow

In Stock
$25.99
An inspirational introduction to the physics of the twenty-first century, Mr Tompkins explores the extreme edges of the universe to understand Einstein's relativity, the birth of the universe and more. In this 1999 edition, Russell Stannard (the Uncle Albert Trilogy) has revised, updated and expanded George Gamow's book Mr Tompkins in Paperback (1965).
Very Good
Only 2 left

Mr Tompkins is back! The mild-mannered bank clerk with the short attention span and vivid imagination has inspired, charmed and informed young and old alike since the publication of the hugely successful Mr Tompkins in Paperback (by George Gamow) in 1965. In this 1999 book, he returns in a new set of adventures exploring the extreme edges of the universe - the smallest, the largest, the fastest, the farthest. Through his experiences and his dreams, you are there at Mr Tompkins' shoulder watching and taking part in the merry dance of cosmic mysteries: Einstein's relativity, bizarre effects near light-speed, the birth and death of the universe, black holes, quarks, space warps and antimatter, the fuzzy world of the quantum, and that ultimate cosmic mystery of all ... love. This text is revised, updated and expanded by best-selling popular-science author Russell Stannard (who wrote the much-acclaimed Uncle Albert series of books for children).

George Gamow (1904 to 1968) was not only one of the most influential physicists of the twentieth century (one of the founders of the Big Bang theory) but was also a master at science popularisation. Of his many popular books, the best known is Mr Tompkins in Paperback (1965). Russell Stannard has established a reputation as one of the most gifted popularisers of science through numerous media appearances and projects, and in particular for his Uncle Albert Trilogy (The Time and Space of Uncle Albert, Black Holes and Uncle Albert and the Quantum Quest), which covers the work of Albert Einstein and quantum theory in a way that is accessible to children of 11+. These books have enjoyed much success and critical acclaim, being translated into 15 languages, shortlisted for the Rhone-Poulenc non-fiction Book Prizes, the Whitbread Children's Novel of the Year, and the American Science Writing Award.

GOR001221505
The New World of Mr Tompkins: George Gamow's Classic Mr Tompkins in Paperback by George Gamow
George Gamow
Used - Very Good
Paperback
Cambridge University Press
2001-08-06
272
0521639921
9780521639927
N/A
Book picture is for illustrative purposes only, actual binding, cover or edition may vary.
This is a used book - there is no escaping the fact it has been read by someone else and it will show signs of wear and previous use. Overall we expect it to be in very good condition, but if you are not entirely satisfied please get in touch with us.