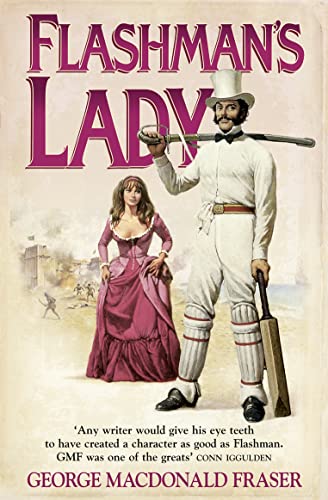 Flashman's at it again! Caught between two Chinese lovers, held captive by Borneo pirates and enslaved by a voluptuous Madagascan queen, Harry Flashman's doing better than ever.

'Flashman is a wonderful creation, by a master storyteller. We'll forever delight in his evil antics' JEFFREY ARCHER

`Flashman is one of the great characters of modern fiction; a rogue, a lover, and always an irresistible read' BERNARD CORNWELL

`Flashman, Sherlock Holmes, Toad of Toad Hall, Bertie Wooster. Any writer would give his eye-teeth to have created a character as good as those. GMF was one of the greats' CONN IGGULDEN

George MacDonald Fraser OBE was a bestselling historical
novelist, journalist and screenwriter. Having worked on newspapers in Britain and Canada he is perhaps most famous for his series of Flashman novels and his anti-hero Harry Flashman. In addition to his novels he also wrote numerous screenplays, most notably The Three Musketeers and the James Bond film Octopussy. George MacDonald Fraser died in January 2008 at the age of 82.

CIN000238934
Flashman's Lady (The Flashman Papers, Book 3) by George MacDonald Fraser
George MacDonald Fraser
The Flashman Papers
Used - Like New
Paperback
HarperCollins Publishers
1999-08-02
448
0006513018
9780006513018
N/A
Book picture is for illustrative purposes only, actual binding, cover or edition may vary.
The book has been read, but looks new. The book cover has no visible wear, and the dust jacket is included if applicable. No missing or damaged pages, no tears, possible very minimal creasing, no underlining or highlighting of text, and no writing in the margins.