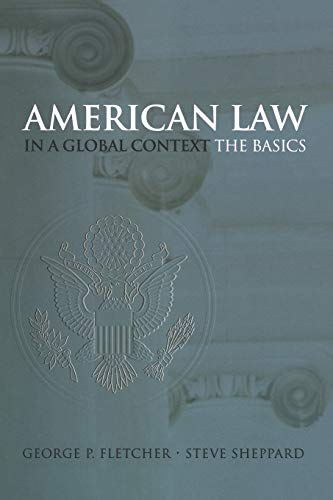 American Law in a Global Context
by George Philip Fletcher

Out of Stock
$49.99
Provides an introduction to the American legal system from a global perspective. This book is designed to help the foreign student grasp the basic ideas of pedagogy, legal institutions and substantive law in the US. It serves as a reference source for LLM students, undergraduates, and students of US law in other countries.
Very Good
Only 0 left

American Law in a Global Context: The Basics by George Philip Fletcher

American Law in a Global Context is an elegant and erudite introduction to the American legal system from a global persepctive. There is no basic book that introduces the foreign lawyer who has already studied the law of foreign jurisdictions to fundamental concepts of American law and legal practice. This book fills that void. Using a comparative approach, George P. Fletcher and Steve Sheppard introduce underlying principles of common and civil law, constitutional, criminal, and public law, and property and procedure. Designed to help the foreign student grasp the basic ideas of pedagogy, legal institutions and substantive law in the US, appendices include an introduction to the common law method, instruction on how to read a case, the interpretation of statutes, and an introduction to the Federal system and US courts systems. A must-own reference source for LLM students, undergraduates, and students of US law in other countries.

"This book is essential reading for all 'thinking' students and lawyers, both inside and outside the United States, who want to understand the place of American law in the great legal traditions of the West. The authors brilliantly identify the central themes, develop them with comparative commentary, and make the most difficult issues accessible to the uninitiated."
--The Honourable Claire L'Heureux Dub (retired), Canadian Supreme Court
"American Law in a Global Context: The Basics is a uniquely comprehensive introduction to the American legal system. From common law to constitutional law, the book takes the reader through the building blocks and provides just the right amount of historical and theoretical context. I highly recommend this book to anyone looking for a crash-course in American public, private, and criminal law."
--The Hon. Alex Kozinski
"American Law in a Global Context is an ideal introduction for LL.M.'s to the study of American law, as well as for United States undergraduates and foreign law students. It is lucidly organized, elegantly written, and exceedingly accurate in its details."
--Daniel R. Coquillette, Director, Harvard Law School History Project
"American Law in a Global Context examines the foundations and evolution of common law in the United States, with an explicit focus on an audience not familiar with these aspects.... In conclusion, I believe this is a well-written volume that accomplishes its stated goal--to help familiarize readers with the American common law. It is a text that I will strongly encourage my students to read, if they wish to pursue a legal education."
--The Law and Politics Book Review
"This book is particularly valuable in its use of legal materials from outside the United States as a way of introducing readers to United States law. The materials are consistently thought-provoking as well as informative."
--Mark Tushnet, author of Comparative Constitutional Law
"A challenging case book for foreign laywers. The case method, while frustrating at first to forign students, will ultimately help them to build their skills in the common law method. ...Exposure to actual cases provides these students with a deeper understanding of how Americans approach law and also confers the benefit of enabling them to be more successful on law school exams, including the bar examination. Fletcher and Sheppard's work is an important contribution to pedagogy and to the resources available to those of us who teach U.S. law to students from abroad." --American Journal of Comparative Law

George P. Fletcher is the Cardozo Professor Jurisprudence at Columbia University School of Law. He is the author of many works on the U.S. Constitution and legal theory, and has taught his comparative introduction to American law course to lawyers from universities throughout the world.

Steve Sheppard is a law professor at the University of Arkansas. He has written widely on legal history and legal philosophy and recently edited The Selected Writings and Speeches of Sir Edward Coke, a founder of modern common law.

Introduction Part I: Common Law 1: Common Law 2: Civil Law 3: The Language of Law: Common and Civil 4: Legal Reasoning Part II: Constitutional Identity 5: The Constitution as Code 6: Judicial Review 7: Federalism 8: The Alternative Constitution 9: Equality Prevails 10: Freedom Fights Back 11: The Jury 12: Due Process Ascendant 13: Coordinating the States 14: Multiple Common Laws? Part III: The Theory of Common Law: Liberalism and its Alternatives 15: Feudalism 16: The Triumph of Equity 17: Contemporary Property 18: The Frontiers of Property 19: Contract as Law 20: Contract as Justice 21: Contractual Harm 22: Foundations of Tort Law 23: Economic Efficiency 24: From Contributory to Comparative Fault 25: Punitive Damages 26: Stages of a Civil Trial Part IV: Criminal Law: The Adversary System and its Alternatives 27: Where Would You Rather Be Tried? 28: The Fate of Bernhard Goetz 29: Self-Defense: Domestic and International Conclusion 30: Summary: The Right and Reasonable Appendices Appendix 1: How to Read (and Brief) a Case Appendix 2: Common Law Method; or How to Do Things with Cases Appendix 3: The Interpretations of Statutes Index

GOR007559087
American Law in a Global Context: The Basics by George Philip Fletcher
George Philip Fletcher
Used - Very Good
Paperback
Oxford University Press Inc
2005-01-31
695
0195167236
9780195167238
N/A
Book picture is for illustrative purposes only, actual binding, cover or edition may vary.
This is a used book - there is no escaping the fact it has been read by someone else and it will show signs of wear and previous use. Overall we expect it to be in very good condition, but if you are not entirely satisfied please get in touch with us.