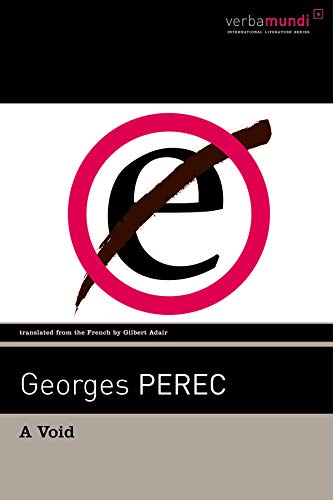 A Void
by Georges Perec

A Void by Georges Perec

A Void is a great linguistic adventure and a metaphysical whodunit, chock-full of plots and subplots, of trails in pursuit of trails, all of displays Georges Perec's virtuosity as a verbal magician. It is also an outrageous verbal stunt: a 300-page novel that never once employs the letter E.
The year is 1968, and as France is torn apart by social and political anarchy, the noted eccentric and insomniac Anton Vowl goes missing. Ransacking his Paris flat, his best friends scour his diary for clues to his whereabouts. At first glance these pages reveal nothing but Vowl's penchant for word games, especially for "lipograms," compositions in which the use of a particular letter is suppressed. But as the friends work out Vowl's verbal puzzles, and as they investigate various leads discovered among the entries, they too disappear, one by one by one, and under the most mysterious circumstances . . .
A book that only Georges Perec could have conceived, Time magazine called A Void, "...an absurdist nirvana of humor, pathos, and loss."

Georges Perec was a French essayist, novelist, memoirist, and filmmaker. Born in Paris in 1936, the child of Polish Jews, his father died as soldier in the Second World War and his mother was killed in the Holocaust. Much of his work dealt with themes of identity, loss, absence--including his most celebrated work, Life A User's Manual. In addition to being honored by the Prix Renaudot (1965), the Prix Jean Vigo (1974), the Prix Medicis (1978), and the French postal service (2002), both an asteroid and a street in Paris were named in his honor--as well as a Google Doodle on his 80th birthday. Gilbert Adair was a Scottish novelist, poet, film critic and journalist--who took on the "fiendish" translation of Georges Perec's postmodern novel, A Void, in which the letter E is not used.

GOR006076602
A Void by Georges Perec
Georges Perec
Verba Mundi (Paperback)
Used - Very Good
Paperback
David R. Godine Publisher Inc
2005-11-17
284
1567922961
9781567922967
N/A
Book picture is for illustrative purposes only, actual binding, cover or edition may vary.
This is a used book - there is no escaping the fact it has been read by someone else and it will show signs of wear and previous use. Overall we expect it to be in very good condition, but if you are not entirely satisfied please get in touch with us.