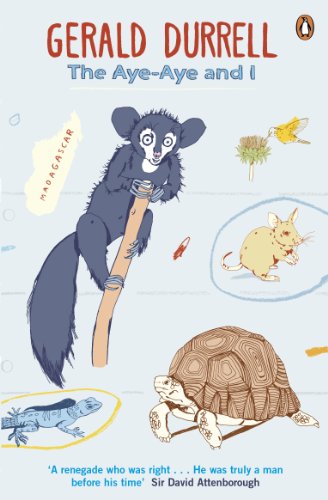 The Aye-Aye and I
by Gerald Durrell

Used Price
$11.69
Free Shipping in the US
In the gloom it came along the branches towards me, its round, hypnotic eyes blazing, its spoon-like ears turning to and fro independently like radar dishes ...it was Lewis Carroll's Jabberwocky come to life ...one of the most incredible creatures I had ever been privileged to meet.
Reviews:
Trustpilot
Very Good Good

The Aye-Aye and I Summary

The Aye-Aye and I by Gerald Durrell

'In the gloom it came along the branches towards me, its round, hypnotic eyes blazing, its spoon-like ears turning to and fro independently like radar dishes . . . it was Lewis Carroll's Jabberwocky come to life . . . one of the most incredible creatures I had ever been privileged to meet.'

The fourth largest island in the world, Madagascar is home to woodlice the size of golf balls, moths the size of Regency fans and the Aye-Aye, a type of lemur held by local superstion to be an omen of death. But when Gerald Durrell visited the island, the destruction of the forests meant that the Aye-Aye and many other creatures were in danger of extinction.
Told with his unique sense of humour and inimitable charm, Gerald Durrell's The Aye Aye and I is the final adventure from one of Britain's best loved conservationists.

Customer Reviews - The Aye-Aye and I

The Aye-Aye and I Reviews

A renegade who was right . . . He was truly a man before his time -- Sir David Attenborough
If animals, birds and insects could speak, they would possibly award Mr Gerald Durrell one of their first Nobel prizes * Times Literary Supplement *
Durrell has an uncanny knack of discovering human as well as animal eccentricities * Sunday Telegraph *

Gerald Durrell was born in Jamshedpur, India, in 1925. He returned to England in 1928 before settling on the island of Corfu with his family. In 1945 he joined the staff of Whipsnade Park as a student keeper, and in 1947 he led his first animal-collecting expedition to the Cameroons. He later undertook numerous further expeditions, visiting Paraguay, Argentina, Sierra Leone, Mexico, Mauritius, Assam and Madagascar. His first television programme, Two in the Bush which documented his travels to New Zealand, Australia and Malaya was made in 1962; he went on to make seventy programmes about his trips around the world. He was awarded the OBE in 1982. Encouraged to write about his life's work by his brother, Durrell published his first book, The Overloaded Ark, in 1953. It soon became a bestseller and he went on to write thirty-six other titles, including My Family and Other Animals, The Bafut Beagles, Encounters with Animals, The Whispering Land, Menagerie Manor, The Amateur Naturalist and The Aye-Aye and I. Gerald Durrell died in 1995.

GOR005479641
The Aye-Aye and I by Gerald Durrell
Gerald Durrell
Used - Very Good
Paperback
Penguin Books Ltd
2012-09-06
208
0670920681
9780670920686
N/A
Book picture is for illustrative purposes only, actual binding, cover or edition may vary.
This is a used book - there is no escaping the fact it has been read by someone else and it will show signs of wear and previous use. Overall we expect it to be in very good condition, but if you are not entirely satisfied please get in touch with us.