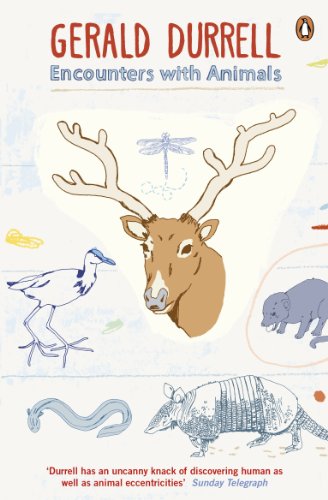 Encounters with Animals
by Gerald Durrell

Used Price
$9,99
Free Shipping in the US
Moving from the West Coast of Africa to the northern tip of South America - and elsewhere - the author observes the courtships, wars and characters of a variety of creatures, from birds of paradise, to ants and anteaters, among others. This title offers an account of the animals he encountered on his travels.
Reviews:
Trustpilot
Very Good Good

Encounters with Animals by Gerald Durrell

'I once travelled back from Africa on a ship with an Irish captain who did not like animals. This was unfortunate, because most of my luggage consisted of about two hundred odd cages of assorted wildlife . . .'

Gerald Durrell's accounts of the animals he encountered on his travels were some of the first widely shared descriptions of the world's most extraordinary animals.

Moving from the West Coast of Africa to the northern tip of South America - and elsewhere - Durrell observes the courtships, wars and characters of a variety of creatures, from birds of paradise, to ants and anteaters, among others.

Durrell has an uncanny knack of discovering human as well as animal eccentricities * Sunday Telegraph *
A renegade who was right . . . He was truly a man before his time -- Sir David Attenborough

Gerald Durrell was born in Jamshedpur, India, in 1925. He returned to England in 1928 before settling on the island of Corfu with his family. In 1945 he joined the staff of Whipsnade Park as a student keeper, and in 1947 he led his first animal-collecting expedition to the Cameroons. He later undertook numerous further expeditions, visiting Paraguay, Argentina, Sierra Leone, Mexico, Mauritius, Assam and Madagascar. His first television programme, Two in the Bush which documented his travels to New Zealand, Australia and Malaya was made in 1962; he went on to make seventy programmes about his trips around the world. In 1959 he founded the Jersey Zoological Park, and in 1964 he founded the Jersey Wildlife Preservation Trust. He was awarded the OBE in 1982. Encouraged to write about his life's work by his brother, Durrell published his first book, The Overloaded Ark, in 1953. It soon became a bestseller and he went on to write thirty-six other titles, including My Family and Other Animals, The Bafut Beagles, Encounters with Animals, The Drunken Forest, A Zoo in My Luggage, The Whispering Land, Menagerie Manor, The Amateur Naturalist and The Aye-Aye and I. Gerald Durrell died in 1995.

GOR004361453
Encounters with Animals by Gerald Durrell
Gerald Durrell
Used - Very Good
Paperback
Penguin Books Ltd
2012-09-06
176
0241955831
9780241955833
N/A
Book picture is for illustrative purposes only, actual binding, cover or edition may vary.
This is a used book - there is no escaping the fact it has been read by someone else and it will show signs of wear and previous use. Overall we expect it to be in very good condition, but if you are not entirely satisfied please get in touch with us.