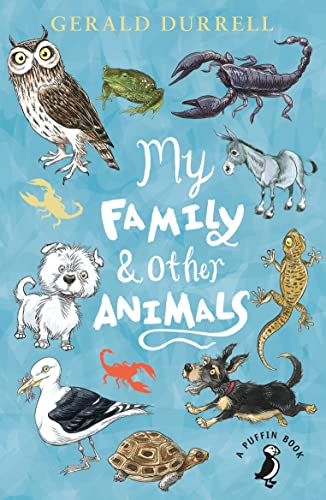 My Family and Other Animals
by Gerald Durrell

Used Price
$9.99
Free Shipping in the US
Reviews:
Trustpilot
Like New

My Family and Other Animals Summary

My Family and Other Animals by Gerald Durrell

Ten-year-old Gerald doesn't know why his older brothers and sisters complain so much.

With snakes in the bath and scorpions on the lunch table, the family home on the Greek island of Corfu is a bit like a zoo so they should feel right at home...

Gerald joyfully pursues his interest in natural history in the midst of an unconventional and chaotic family life - all brilliantly retold in this very funny book.

Customer Reviews - My Family and Other Animals

Gerald Durrell was born in Jamshedpur, India, in 1925. He returned to England in 1928 before settling on the island of Corfu with his family. In 1945 he joined the staff of Whipsnade Park as a student keeper, and in 1947 he led his first animal-collecting expedition to the Cameroons. He later undertook numerous further expeditions, visiting Paraguay, Argentina, Sierra Leone, Mexico, Mauritius, Assam and Madagascar. His first television programme, Two in the Bush which documented his travels to New Zealand, Australia and Malaya was made in 1962; he went on to make seventy programmes about his trips around the world. In 1959 he founded the Jersey Zoological Park, and in 1964 he founded the Jersey Wildlife Preservation Trust. He was awarded the OBE in 1982. Encouraged to write about his life's work by his brother, Durrell published his first book, The Overloaded Ark, in 1953. It soon became a bestseller and he went on to write thirty-six other titles, including My Family and Other Animals, The Bafut Beagles, Encounters with Animals, The Drunken Forest, A Zoo in My Luggage, The Whispering Land, Menagerie Manor, The Amateur Naturalist and The Aye-Aye and I. Gerald Durrell died in 1995.

GOR009446793
My Family and Other Animals by Gerald Durrell
Gerald Durrell
A Puffin Book
Used - Like New
Paperback
Penguin Random House Children's UK
2016-05-05
384
0141374101
9780141374109
N/A
Book picture is for illustrative purposes only, actual binding, cover or edition may vary.
The book has been read, but looks new. The book cover has no visible wear, and the dust jacket is included if applicable. No missing or damaged pages, no tears, possible very minimal creasing, no underlining or highlighting of text, and no writing in the margins.