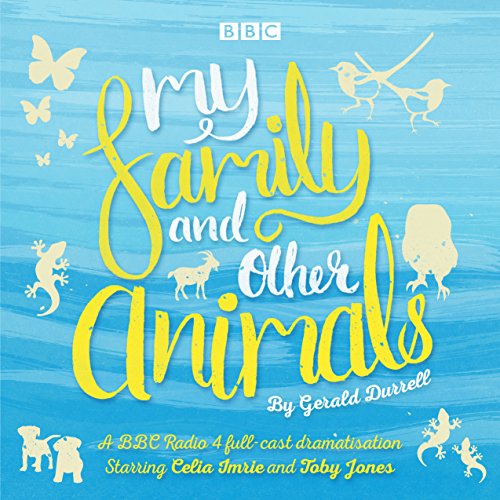 My Family and Other Animals by Gerald Durrell

My Family and Other Animals: BBC Radio 4 full-cast dramatization by Gerald Durrell

My Family and Other Animals is the classic tale of naturalist Gerald Durrell's magical 1930s childhood on pre-war Corfu. His descriptions of his eccentric family and his encounters with the local creatures are full of humour and charm, and the book has delighted readers of all ages for sixty years.

When they arrive in Corfu, Gerry is thrilled to find a paradise of exotic wildlife to be explored. Soon he is embarking on natural history expeditions, swimming in the clearblue sea and befriending the island's inhabitants.Gerry's relatives are less impressed with his exploits, especially when his burgeoning animal collection sparks chaos at the family's Christmas party...

With a specially created soundtrack, this vivid adaptation takes the story out of the studio and into the Greek wilderness that enthralled Durrell the young naturalist. Duration: 2 hours approx.

Gerald Durrell, OBE (1925 - 1995) was an English naturalist, zookeeper, conservationist, author, and television presenter. He founded what is now called the Durrell Wildlife Conservation Trust and the Jersey Zoo (now Durrell Wildlife Park) on the Channel Island of Jersey in 1958, but is perhaps best remembered for writing a number of books based on his life as an animal collector and enthusiast. He was the youngest brother of novelist Lawrence Durrell. [source: Wikipedia]
GOR010777473
My Family and Other Animals: BBC Radio 4 full-cast dramatization by Gerald Durrell
Gerald Durrell
Used - Like New
Hardback
BBC Audio, A Division Of Random House
2016-04-07
1785292730
9781785292736
N/A
Book picture is for illustrative purposes only, actual binding, cover or edition may vary.
The book has been read, but looks new. The book cover has no visible wear, and the dust jacket is included if applicable. No missing or damaged pages, no tears, possible very minimal creasing, no underlining or highlighting of text, and no writing in the margins
Trustpilot