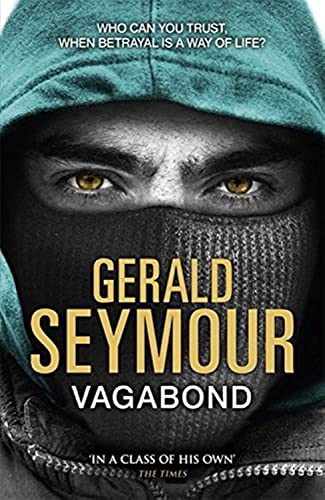 Used Price
$13.69
Free Shipping in the US
Who can you trust, when betrayal is a way of life?
Reviews:
Trustpilot
Very Good

It was a dirty job in a dirty war.

Danny Curnow, known in the army family by his call sign, Vagabond, ran agents, informers. Played God with their lives and their deaths, and was the best at his job - and he quit when the stress overwhelmed him.

Now he lives in quiet isolation and works as a guide to tourists visiting the monuments and cemeteries of an earlier, simpler, conflict on Normandy's D-Day beaches.

Until the call comes from an old boss, Bentinick.

Violence in Northern Ireland is on the rise again. Weapons are needed for a new campaign. Gaby Davies of MI5, sparky and ambitious, runs the double agent Ralph Exton, who will be the supposed middle man in brokering an arms deal with a Russian contact, Timofey.

The covert world of deception and betrayal was close to destroying Danny across the Irish Sea. Fifteen years later the stakes are higher, the risks greater, and there is an added agenda on the table. If he wants to survive, Danny will have to prove, to himself, that he has not softened, that he is as hard and ruthless as before.

VAGABOND shows Gerald Seymour writing at the top of his powers and returning to the territory of some of his greatest bestsellers, Harry's Game, Field of Blood and The Journeyman Tailor.

A plot worthy of Le Carre. * Irish Times *
Without argument, Gerald Seymour produces the most intelligent writing in the thriller genre ... Danny is a classic Seymour protagonist, and the tension here is conjured with authority. * Financial Times *

Gerald Seymour exploded onto the literary scene in 1975 with the massive bestseller HARRY'S GAME. The first major thriller to tackle the modern troubles in Northern Ireland, it was described by Frederick Forsyth as 'like nothing else I have ever read' and it changed the landscape of the British thriller forever.

Gerald Seymour was a reporter at ITN for fifteen years. He covered events in Vietnam, Borneo, Aden, the Munich Olympics, Israel and Northern Ireland. He has been a full-time writer since 1978.

GOR007166074
Vagabond by Gerald Seymour
Gerald Seymour
Used - Very Good
Paperback
Hodder & Stoughton General Division
2015-05-21
432
1444798944
9781444798944
N/A
Book picture is for illustrative purposes only, actual binding, cover or edition may vary.
This is a used book - there is no escaping the fact it has been read by someone else and it will show signs of wear and previous use. Overall we expect it to be in very good condition, but if you are not entirely satisfied please get in touch with us.