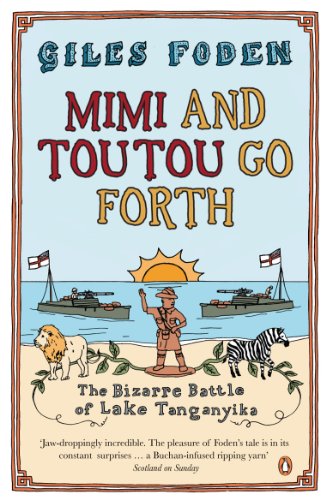 Mimi and Toutou Go Forth
by Giles Foden

In Stock
$9.39
It was the First World War and Britain was in trouble. Kaiser Wilhelm had put two warships on Lake Tanganika in Central Africa, giving him control of the region, and it was vital for Britain that those ships be destroyed.
Very Good Good
7 in stock

Mimi and Toutou Go Forth Summary

Mimi and Toutou Go Forth: The Bizarre Battle of Lake Tanganyika by Giles Foden

At the start of World War One, German warships controlled Lake Tanganyika in Central Africa. The British had no naval craft at all upon 'Tanganjikasee', as the Germans called it. This mattered: it was the longest lake in the world and of great strategic advantage. In June 1915, a force of 28 men was despatched from Britain on a vast journey. Their orders were to take control of the lake. To reach it, they had to haul two motorboats with the unlikely names of Mimi and Toutou through the wilds of the Congo.

The 28 were a strange bunch -- one was addicted to Worcester sauce, another was a former racing driver -- but the strangest of all of them was their skirt-wearing, tattoo-covered commander, Geoffrey Spicer-Simson. Whatever it took, even if it meant becoming the god of a local tribe, he was determined to cover himself in glory. But the Germans had a surprise in store for Spicer-Simson, in the shape of their secret 'supership' the Graf von Gotzen . . .

Unearthing new German and African records, the prize-winning author of The Last King of Scotland retells this most unlikely of true-life tales with his customary narrative energy and style.

Fitzcarraldo meets Heart of Darkness, this is rich, vivid and flashmanesque in its appeal - military history at its most absorbing and entertaining

Mimi and Toutou Go Forth Reviews

Giles Foden was born in Warwickshire in 1967 and grew up in Africa. The author of three novels -- Zanzibar, Ladysmith and The Last King of Scotland -- he works on the books pages of the Guardian. From 1993 to 1997 he was an assistant editor of the TLS. In 1998 he won the Whitbread First Novel Award and a Somerset Maugham Prize.

GOR001244888
Mimi and Toutou Go Forth: The Bizarre Battle of Lake Tanganyika by Giles Foden
Giles Foden
Used - Very Good
Paperback
Penguin Books Ltd
2005-07-07
336
0141009845
9780141009841
N/A
Book picture is for illustrative purposes only, actual binding, cover or edition may vary.
This is a used book - there is no escaping the fact it has been read by someone else and it will show signs of wear and previous use. Overall we expect it to be in very good condition, but if you are not entirely satisfied please get in touch with us.