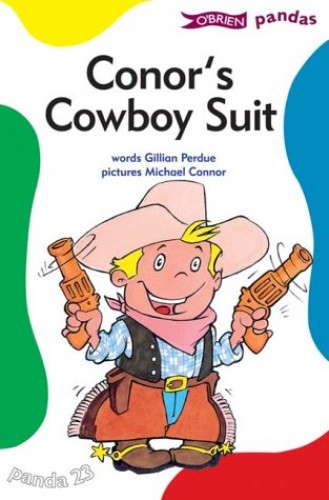 Used Price
$7.69
Free Shipping in the US
When Conor's parents give him a present of a cowboy suit he wants to wear it all the time - even to school!
Panda 23
Reviews:
Trustpilot
Very Good

When Conor's parents give him a present of a cowboy suit he wants to wear it all the time. At school Conor is teased about his cowboy outfit, but he doesn't care. Then the other children in his class think it's great fun and they want to dress up too.

So their teacher decides that all the class may dress up on Fridays. Even Teacher dresses up -- as the sheriff! Conor's big sister is jealous, so she wears her magician's outfit to school -- but everyone else in her class is in uniform, until, of course, they too want to dress up. And all because of Conor and his cowboy suit!

Gillian Perdue is a children's writer and dancing teacher. She previously worked as a primary school teacher for over fifteen years, and has always had a deep love for children's books. Gillian acted as chairperson of the Bisto Book Awards 1999-2000, and she has written resource materials for the use of real books in the classroom. Gillian's first book, Adam's Starling was written for older readers and won the Eilis Dillon Memorial Award 2002. The Irish Times described Adam's Starling as an impressive debut. Since then she has written three books in the successful O'Brien Panda Series - Conor's Cowboy Suit, Panda No. 23, Conor's Concert, Panda No. 25, and Conor's Canvas, Panda No. 35. The spirited and determined Conor, who loves to do things his way and his way only has proved to be extremely popular with younger readers. Gillian is married with two children, and lives in Dublin. Michael Connor is a school teacher who lives in Limerick.

GOR001403521
Conor's Cowboy Suit by Gillian Perdue
Gillian Perdue
Pandas
Used - Very Good
Paperback
O'Brien Press Ltd
2002-09-19
64
0862787785
9780862787783
N/A
Book picture is for illustrative purposes only, actual binding, cover or edition may vary.
This is a used book - there is no escaping the fact it has been read by someone else and it will show signs of wear and previous use. Overall we expect it to be in very good condition, but if you are not entirely satisfied please get in touch with us.