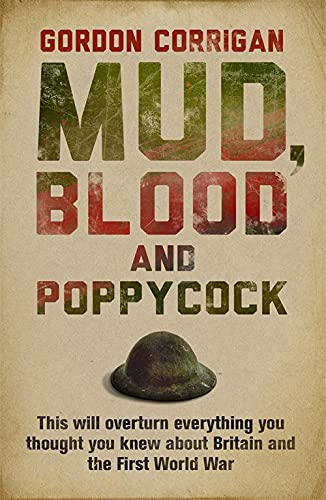 In Stock
$10.69
The true story of how Britain won the First World War.
Very Good
8 in stock

Mud, Blood and Poppycock: Britain and the Great War by Gordon Corrigan

The true story of how Britain won the First World War.

The popular view of the First World War remains that of BLACKADDER: incompetent generals sending brave soldiers to their deaths. Alan Clark quoted a German general's remark that the British soldiers were 'lions led by donkeys'. But he made it up.

Indeed, many established 'facts' about 1914-18 turn out to be myths woven in the 1960s by young historians on the make. Gordon Corrigan's brilliant, witty history reveals how out of touch we have become with the soldiers of 1914-18. They simply would not recognize the way their generation is depicted on TV or in Pat Barker's novels.

Laced with dry humour, this will overturn everything you thought you knew about Britain and the First World War. Gordon Corrigan reveals how the British embraced technology, and developed the weapons and tactics to break through the enemy trenches.

'Corrigan brings a mass of evidence coupled with an ability to write clear, crisp, highly readable narrative...Mud, Blood and Poppycock should be in every school library' - Correlli Barnett, DAILY MAIL'A fascinating read because he sets it up as a trial by jury. Each chapter takes a specific 'myth' of the Great War and subjects it to a test of evidence. The result - even if you want to disagree with Corrigan's overall thesis - is gripping' - George Kerevan, SCOTSMAN

The author was commissioned from the Royal Military Academy, Sandhurst in 1962 and retired from the Brigade of Gurkhas in 1998. A member of the British Commission for Military History and a Fellow of the Royal Asiatic Society, he speaks fluent Nepali and is a keen horseman.

GOR001247620
Mud, Blood and Poppycock: Britain and the Great War by Gordon Corrigan
Gordon Corrigan
Cassel Military
Used - Very Good
Paperback
Orion Publishing Co
2004-07-01
464
0304366595
9780304366590
N/A
Book picture is for illustrative purposes only, actual binding, cover or edition may vary.
This is a used book - there is no escaping the fact it has been read by someone else and it will show signs of wear and previous use. Overall we expect it to be in very good condition, but if you are not entirely satisfied please get in touch with us.