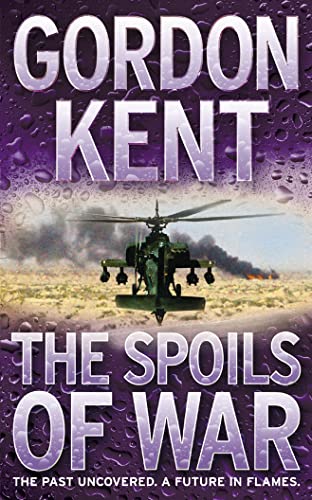 The Spoils of War
by Gordon Kent

The Spoils of War Summary

The Spoils of War by Gordon Kent

In Tel Aviv, Commander Alan Craik, a US Navy veteran agrees to check out the death of a former Navy enlisted employee. He plans to be out the door and on to his real work in half an hour. But the task quickly turns dangerous, and what should have been a routine investigation becomes something very ugly.

Nominal American allies in Israel withhold or alter information; nominal colleagues at home set up their own operation to satisfy the political needs of Washington; a wife betrays her husband and deceit and distrust prove to be the only common denominator.

When Mike Dukas, a dogged, cynical special agent of the Naval Criminal Investigative Service joins the investigation, it leads them all from Tel Aviv to Gaza and the Greek island of Lesvos to Jerry Piat, a renegade CIA officer.

With agents of Mossad and the Palestinian Authority always close behind them, Alan Craik demands the answers to some far-reaching questions. What are the rules in modern conflict? Where is honour? And what is the cost of telling the truth?

The Spoils of War Reviews

Kent knows his subject at first hand and the expertise shows on the page: high stakes, pounding tension and the best dogfights put on paper. A lot of thrillers these days, you come away feeling like you've been in a simulator. Gordon Kent straps you into the real thing. Enjoy the ride!'
IAN RANKIN, on Night Trap

`Flying, spying and dying - Night Trap is the real straight Navy stuff. Better strap yourself to the chair. I loved it.'
STEPHEN COONTS

`Tom Clancy used to have the high-tech military thriller stakes all to himself but now Gordon Kent has entered the field, and how. There's action on all fronts with Alan Craik at the heart of it, whether it's a carrier group in the Med confronting a rogue Russian sub commander, mounting a rescue mission for a captured CIA agent in Africa, or helping combat a high-level conspiracy in Washington. Non-stop ... a smoking gun of a story.'
Northern Echo, on Peacemaker

`Told with all the authority of inside knowledge ... an absorbing tale of international skulduggery.'
Irish News, on Peacemaker

`Consistently excellent ... loaded with gunfights, snappy dialogue and the aerial hijinks of supersonic jet fighters. The high testosterone doses satisfy, but best is the complex and clever web of motive Kent weaves for the mole.'
Publishers Weekly, on Top Hook

GOR001234265
The Spoils of War by Gordon Kent
Gordon Kent
Used - Very Good
Paperback
HarperCollins Publishers
2007-09-01
512
0007178735
9780007178735
N/A
Book picture is for illustrative purposes only, actual binding, cover or edition may vary.
This is a used book - there is no escaping the fact it has been read by someone else and it will show signs of wear and previous use. Overall we expect it to be in very good condition, but if you are not entirely satisfied please get in touch with us.