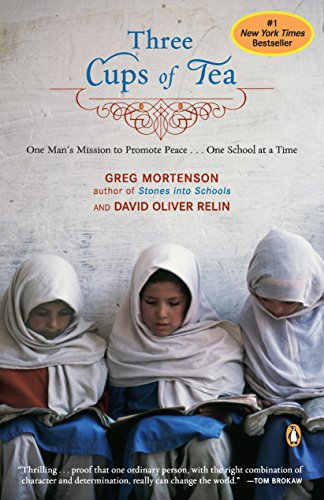 In Stock
$8.39
The astonishing, uplifting story of a real-life Indiana Jones and his humanitarian campaign to use education to combat terrorism in the Taliban's backyard.
Very Good Good
9 in stock

Three Cups of Tea: One Man's Mission to Promote Peace ... Once School at a Time by Greg Mortenson

The astonishing, uplifting story of a real-life Indiana Jones and his humanitarian campaign to use education to combat terrorism in the Taliban's backyard. Anyone who despairs of the individual's power to change lives has to read the story of Greg Mortenson, a homeless mountaineer who, following a 1993 climb of Pakistan's treacherous K2, was inspired by a chance encounter with impoverished mountain villagers and promised to build them a school. Over the next decade he built fifty-five schools - especially for girls - that offer a balanced education in one of the most isolated and dangerous regions on earth. As it chronicles Mortenson's quest, which has brought him into conflict with both enraged Islamists and uncomprehending Americans, Three Cups of Tea combines adventure with a celebration of the humanitarian spirit.

"Greg Mortenson's dangerous and difficult quest . . . is not only a thrilling read, it's proof that one ordinary person, with the right combination of character and determination, really can change the world."-Tom Brokaw

"An inspiring chronicle . . . this is one protagonist who clearly deserves to be called a hero."-People

Greg Mortenson is the director of the Central Asia Institute, and he spends several months each year building schools in Pakistan and Afghanistan. He lives in Montana with his wife and two children. David Oliver Relin is a globe-trotting journalist who has won more than forty national awards for his writing and editing. He lives in Portland, Oregon.

GOR001223995
Three Cups of Tea: One Man's Mission to Promote Peace ... Once School at a Time by Greg Mortenson
Greg Mortenson
Used - Very Good
Paperback
Unknown
0
0143038257
9780143038252
N/A
Book picture is for illustrative purposes only, actual binding, cover or edition may vary.
This is a used book - there is no escaping the fact it has been read by someone else and it will show signs of wear and previous use. Overall we expect it to be in very good condition, but if you are not entirely satisfied please get in touch with us.