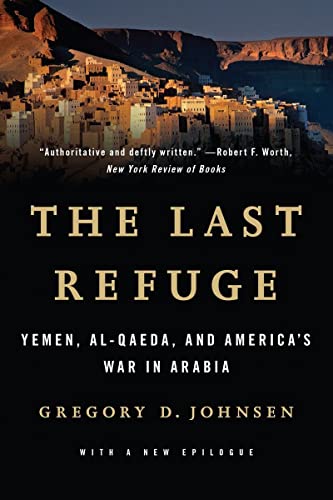 Used Price
$10.99
Free Shipping in the US
"The best new book on al Qaeda . . . and the best book on Yemen in years."-Bruce Riedel, Daily Beast
Reviews:
Trustpilot
Very Good

Far from the battlefields of Iraq and Afghanistan, the United States and al-Qaeda are fighting a clandestine war of drones and suicide bombers in an unforgiving corner of Arabia.

The Last Refuge charts the rise, fall, and resurrection of al-Qaeda in Yemen over the last thirty years, detailing how a group that the United States once defeated has now become one of the world's most dangerous threats. An expert on Yemen who has spent years on the ground there, Gregory D. Johnsen uses al-Qaeda's Arabic battle notes to reconstruct their world as they take aim at the United States and its allies. Johnsen brings readers in-side al-Qaeda's training camps and safe houses as the terrorists plot poison attacks and debate how to bring down an airliner on Christmas Day. The Last Refuge is an eye-opening look at the successes and failures of fighting a new type of war in one of the most turbulent countries in the world.

"The Last Refuge offers a valuable look at al-Qaeda's operational history in Yemen. Gregory Johnsen has done us all a service by explaining the country, the threats, and why we should pay attention." -- Ali H. Soufan, author of The Black Banners: The Inside Story of 9/11 and the War Against al-Qaeda
"Johnsen... has produced the first comprehensive history of the al Qaeda movement [in Yemen]: an engrossing account of the operations, personalities, and motivations that have caused the US such headaches." -- Publishers Weekly
"Gregory Johnsen has written the best new book on al Qaeda in 2012 and the best book on Yemen in years.... The Last Refuge: Yemen, Al Qaeda and America's War in Arabia is a detailed narrative account of the development of [Al Qaeda in the Arabian Peninsula]. It is also a great read..." -- Bruce Riedel - Daily Beast
"The Last Refuge is an authoritative and deftly written account of al-Qaeda's Yemeni incarnation. The book is dense with terrorist genealogies, but it also offers a lively portrait of the American government's stumbling efforts to understand and influence a profoundly alien culture. His account, starting in the 1980s, implicitly places Yemen near the center of the global jihadi movement; it may not be where al-Qaeda started, but it has always furnished many of the movement's foot soldiers, and it has now succeeded Afghanistan as the US government's most urgent concern about counterterrorism." -- Robert R. Worth - The New York Review of Books
"Gripping and insightful." -- Booklist
"Part modern history, part explanatory narrative... Johnson moves deftly between decades, continents and languages.... The Last Refuge is a cogent insight into what the U.S. has done in the past twenty-five years-a bird's-eye-view on those successes and failures, in all their shades of horrid gray..." -- Haley Sweetland Edwards - The Washington Monthly
"A break-through book on one of the most under-reported and misunderstood stories of the post 9-11 era. Penned in gripping prose and with incredible attention to detail, The Last Refuge unfolds with the pace of an action novel. But this story is all too true." -- Jeremy Scahill, author of the international bestseller, Blackwater: The Rise of the World's Most Powerful Mercenary Army
"A wonderfully well written and deeply reported account of the only al-Qaeda affiliate that continues to pose a real threat to the West." -- Peter L. Bergen, author of Manhunt: The Ten-Year Search for Osama bin Laden from 9/11 to Abbottabad

Gregory D. Johnsen, a former Fulbright Fellow in Yemen, is a PhD candidate at Princeton University and the Michael Hastings National Security Fellow at BuzzFeed. A frequent guest on NPR, he has contributed essays to the New York Times. He lives in Ithaca, New York.

CIN000115238
The Last Refuge: Yemen, al-Qaeda, and America's War in Arabia by Gregory D. Johnsen
Gregory D. Johnsen
Used - Very Good
Paperback
WW Norton & Co
2014-10-14
384
0393349977
9780393349979
N/A
Book picture is for illustrative purposes only, actual binding, cover or edition may vary.
This is a used book - there is no escaping the fact it has been read by someone else and it will show signs of wear and previous use. Overall we expect it to be in very good condition, but if you are not entirely satisfied please get in touch with us.