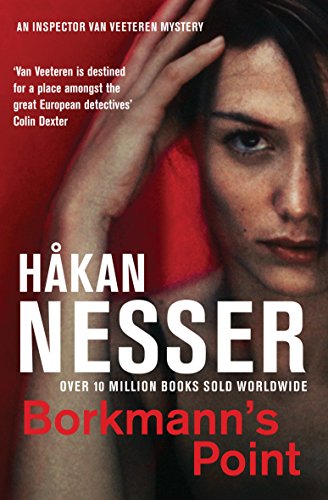 A Swedish crime writer as thrilling as Mankell, a detective as compelling as Wallander . . .

Borkmann's Point by Hakan Nesser is the second gripping novel in the thrilling Van Veeteren series.

'Borkmann's rule was hardly a rule; in fact, it was more of a comment, a landmark for tricky cases . . . In every investigation, he maintained, there comes a point beyond which we don't really need any more information. When we reach that point, we already know enough to solve the case by means of nothing more than some decent thinking.'

Two men are brutally murdered with an axe in the quiet coastal town of Kaalbringen and Chief Inspector Van Veeteren, bored on holiday nearby, is summoned to assist the local authorities. The local police chief, just days away from retirement, is determined to wrap things up before he goes.

But there is no clear link between the victims. Then one of Van Veeteren's colleagues, a brilliant young female detective, goes missing - perhaps she has reached Borkmann's Point before anyone else . . .

Borkmann's Point is followed by the third title in the series, The Return.

One of the best of the Nordic Noir writers. * Guardian *
The godfather of Swedish crime. * Metro *
One of Sweden's best crime writers. * Mail on Sunday *
A master of suspense. * Sunday Times *

Hakan Nesser is one of Sweden's most popular crime writers, receiving numerous awards for his novels featuring Inspector Van Veeteren, including the European Crime Fiction Star Award (Ripper Award), the Swedish Crime Writers' Academy Prize (three times) and Scandinavia's Glass Key Award. The Van Veeteren series is published in over twenty-five countries and has sold over 10 million copies worldwide. Hakan Nesser lives in Gotland with his wife, and spends part of each year in the UK.

In addition to the popular Van Veeteren series, his other books include the psychological thriller The Living and the Dead in Winsford and The Barbarotti series.

GOR001248753
Borkmann's Point by Hakan Nesser
Hakan Nesser
The Van Veeteren series
Used - Very Good
Paperback
Pan Macmillan
2007-05-04
432
0330492764
9780330492768
Short-listed for CWA International Dagger 2006 (UK)
Book picture is for illustrative purposes only, actual binding, cover or edition may vary.
This is a used book - there is no escaping the fact it has been read by someone else and it will show signs of wear and previous use. Overall we expect it to be in very good condition, but if you are not entirely satisfied please get in touch with us.