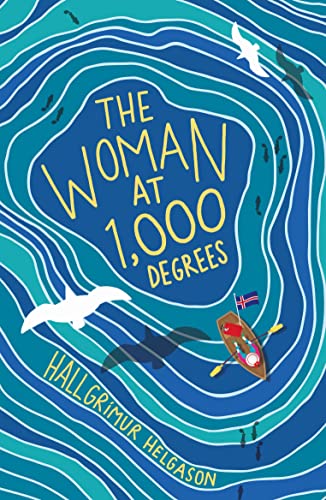 The Woman at 1,000 Degrees
by Hallgrimur Helgason

The Woman at 1,000 Degrees Summary

The Woman at 1,000 Degrees by Hallgrimur Helgason

'The hottest new book from Iceland is The Woman at 1,000 Degrees... What a story it is.' Washington Post

Eighty-year old Herra Bjoernsson lies alone in her garage waiting to die. Oh, she has two weeks left, maybe three - she has booked her cremation appointment, at a blistering 1,000 degrees, so it won't be long. But until then she has her cigarettes, her laptop, a World War II grenade, and her memories to sustain her.

One of the most original narrators in literary history, Herra takes readers with her on a dazzling ride of a novel as she reflects - in a voice by turns darkly funny, poignant and always, always smart - on the mishaps, tragedies and turns of luck that shaped her life. And with a bawdy, uncompromising spirit, she has survived it all. As hilarious as it is heartbreaking, Hallgrimur Helgason tells the deeply moving story of a woman swept up by the forces of history.

Customer Reviews - The Woman at 1,000 Degrees

The Woman at 1,000 Degrees Reviews

`Published in 13 languages, this novel about one feisty Icelandic woman's proximity to history's big moments is a thoroughly entertaining ride.' * People magazine *
`A blitzkrieg of a novel... Funny, shrewd and reliably rude... This hugely entertaining tale is surely destined for classic status.' * Guardian *
`In this black-humoured novel...the narrator recounts her misshapen life with engaging vividness.' * The New Yorker *
`Breathtaking... Herra's life, and voice, is deeply compelling.' * Financial Times *
`The hottest new book from Iceland... [Herra's] perspective might be just what we need in these uncertain times: She survives and shares her story on her terms. And what a story it is, one worth reading to further understand the complexity of World War II - and to enjoy the quick wit of a woman you won't forget.' * Washington Post *
`The Woman at 1,000 Degrees is incredibly funny, incredibly insightful and incredibly moving.' * Fiona Mozley, author of Elmet *
`What a novel! Helgason's Woman at 1,000 Degrees is a gutsy, brilliant book: I could not tear myself away from it. Octogenarian Herra Bjoernsson's dying recollections, as she lies nursing a hand grenade between her legs in an Icelandic garage, hurtle the reader headfirst into an epic narrative of war, loss, desire and survival, across years and continents. Both funny and deeply moving, I finished it utterly dazzled, my ears ringing.' * Hannah Kent, author of Burial Rites *
`One of the most original novels of the year.' * Irish Independent *
`An explosive experience.' * Elle *
`By turns funny, sweet, gripping and sad but never sentimental, Helgason's work...is a sensitive tale of a nearly lived life.' * Monocle *
`Herra...is exceedingly quick-witted and has a wickedly colorful way with words... Brilliantly written with flashing insights.' * Kirkus *
'The Woman at 1,000 Degrees is a bold work of fiction that gnaws at the silence blanketing the blackest holes of humanity to lay bare the author's dark vision of truth.' * Washington Independent Review of Books *
'This novel is a shock, a laugh, an evocation of grief, and a tribute to survival and imagination.' * Affinity Konar, author of Mischling *
'Helgason's sad and funny novel begins in 2009, as 80-year-old Herra Bjoernsson lies dying in a Reykavik garage, still in possession of a live hand grenade from World War II...In her unsentimental, unsparing narrative, she offers insights into Icelandic culture and character, including a riff on reticence and a brief summary of Iceland's financial meltdown. Like the Icelandic landscape, she can be both appealing and treacherous.' * Publishers Weekly, starred review *
`Compelling...uplifting...required reading for those who want sour along with the sweet of life.' * New York Journal of Books *
`A very enjoyable story...a terrific read. Herra is a great character; she is bawdy, at times outright vulgar and mischievous.' * The Bookshelf, ABC Radio Australia *
'Gripping, darkly comic, and utterly original.' * Valerie Martin, author of Property *
'Icelandic novelist Helgason shares with John Irving a knack for masterful plotting and clever, sarcastic humour...anyone willing to...revel in its flights of language will find much to enjoy.' * Booklist *
`Helgason's characters are rare beauties. One falls for his absurd fantasies immediately.' * Spiegel.de *
`Long after I read it, the story and its prickly protagonist has stayed with me.' * Esmeralda Santiago, author of When I Was Puerto Rican, New York Magazine *
`You don't know her yet, but she already despises you... With a biting humour, she examines love, marriage, sex, politics, and those who practice them.' * Le Figaro Magazine *
`Extraordinarily absorbing and enjoyable. The story revolves around a woman who lived ahead of her time. Many young women would idealize Herra Bjoernsson. At the same time, it gives an insight into life during World War II.' * Washington Book Review *
'This is a profoundly, triumphantly feminist book... There's nothing like it in our language.' * Toronto Star *
`Helgason's novel is superbly written, with characters and events that grab your attention and make it hard to put down.' * Tulsa Book Review *
`Unpredictable and endearing.' * Jacksonville Journal-Courier *
`It's a sophisticated work, combining elements of Bildungsroman, comic burlesque, fictional biography and historical commentary... The novel's sheer invention, talkativeness and linguistic zest recall Joyce, while the plot itself, with its logical progression into the absurd, is not too distant from the labyrinths of Kafka.' * David McDuff, literary translator and critic *
`A magnificent novel about maybe the most memorable character in Icelandic fiction.' * Frettabladid *
`A mind-blowing doorstopper' * Le Monde des Livres *
`This novel is toxic. The cover, the crumpled lady with the pink wig should have been warning enough, still one is stunned. This novel charges at you like a little terrier after you have opened a garden gate. It barks short, hoarse sentences. However, you don't want to put this book down again!' * Der Spiegel 1 *
`A ride through the 20th century of the ice island through the Nazi German Reich to Argentina and back again - wildly, tough, and devilishly clever. "Like" it? It rocks!' * Stern *
`The most surprising, funny, bonkers novel of the season' * Lire *
`Passionate, explosive and fiery...' * El Periodico *
`Book of the year!' * SWR3 Radio *
`Irresistible.' * Paris Match *
`A caustic and human story that is tragic with a great sense of humour at the same time.' * ABC Libros *
`If this had been written by a different, non-Icelandic author, it would be a pulp Charles Dickens, with a bit of Chuck Palahniuk thrown in.' * Il Giornale *
`Playing with time and with history, this is a tragicomic and hard-hitting novel in which the author gets to the heart of a global situation and the vagaries of Icelandic politics.' * El Diario *

Hallgrimur Helgason is an Icelandic painter, novelist, translator, and columnist. His first novel was published in 1990 and he came to international fame with his third novel, 101 Reykjavik, which was translated into fourteen languages and was made into a film. A father of three, he divides his time between Reykjavik and the island of Hrisey. Find out more at hallgrimurhelgason.com. Brian FitzGibbon is a translator and author. He is the translator of 101 Reykjavik, also by Hallgrimur Helgason, and of Butterflies in November by Audur Ava Olafsdottir, which was longlisted for the Independent Foreign Fiction Prize in 2014. He lives in Reykjavik.

GOR009631191
The Woman at 1,000 Degrees by Hallgrimur Helgason
Hallgrimur Helgason
Used - Very Good
Paperback
Oneworld Publications
2018-11-01
464
1786074559
9781786074553
N/A
Book picture is for illustrative purposes only, actual binding, cover or edition may vary.
This is a used book - there is no escaping the fact it has been read by someone else and it will show signs of wear and previous use. Overall we expect it to be in very good condition, but if you are not entirely satisfied please get in touch with us.