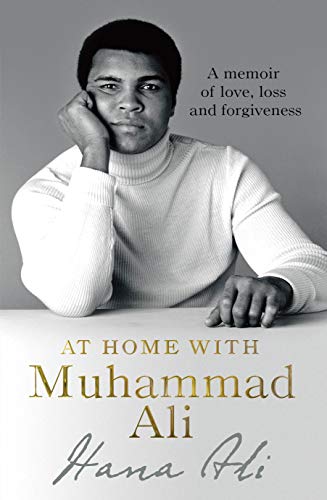 At Home with Muhammad Ali
by Hana Yasmeen Ali

At Home with Muhammad Ali Summary

At Home with Muhammad Ali: A Memoir of Love, Loss and Forgiveness by Hana Yasmeen Ali

From the daughter of Muhammad Ali comes an intimate portrait of the heavyweight boxing champion and a final love letter from a daughter to her father.

Through audio journals, love letters and cherished memories, Ali's daughter Hana tells the story of a very typical and yet fully-unique family, the rise and fall of her parent's marriage and the struggles they faced as a family surrounding Ali's loss to Larry Holmes in 1981.

With the decline of Ali's voice, his recordings are important to history as they are to his personal legacy. At Home with Muhammad Ali offers a candid look at a man who was trying to find his purpose in the world as he realized he was coming to the end of his lucrative sporting career, all the while trying to balance fatherhood and his worldly and political obligations. Additionally, Hana tells of the everyday adventures that the family experienced around the house-with visitors like Michael Jackson and Clint Eastwood dropping by. And for the first time, Hana's mother Veronica will share her memories of the 12-year relationship with Muhammad.

At Home with Muhammad Ali is a candid and revealing portrait of a legend, a man admired and respected as the greatest sporting icon of our age.

At Home with Muhammad Ali Reviews

This book is an amazing insight into an incredible man * Lorraine Kelly *
To millions of fans his reputation went beyond the boxing ring. In At Home With Muhammad Ali, Hana Ali tells what it was like to grow up with the most legendary name in sport. [The book] vividly evokes an Ali who is barely recognisable as the cocky, complicated boxer and incendiary political figure depicted in obituaries. Instead, Hana fleshes out the Ali of his later years... She presents her father as a funny, doting family man who looks for ways to bring joy to ordinary people. Ultimately, his final victory is his greatest: coming to terms with this illness after realising that it was the one opponent he would never beat. * The Times *
Intimate... Moving... [This] memoir charts Hana's treasured memories of a man hailed as one of the first global superstars of sport. * Sunday Mirror *
How wonderful, after decades of thoughtful but at-a-distance portraits of Muhammad Ali, we have this exquisite and movingly intimate one. His daughter, Hana, has permitted us all to fill out-with love-our own sense of the real man behind all the mythology. This is a hugely important addition to our understanding of the Greatest of All Time. -- Ken Burns, filmmaker
A famous man will be viewed one way by the public. Another by his wife. Another by his children. Hana brings together these vantage points - and allows everyone to see Muhammad Ali in a new light. -- Larry King

Hana Yasmeen Ali is the third youngest child of Muhammad Ali. She is the author of three books about her father's life and legacy and has been featured in several documentaries and television spotlights on him; most notably I am Ali and The Trials of Muhammad Ali. Hana has written articles for CNN.com, ESPN and Citizens of Humanity Magazine. She was a behaviour specialist working with autistic children for ten years and is now a Realtor. Hana currently lives in Los Angeles with her husband, Mixed Martial Artist Kevin Casey.

GOR010083205
At Home with Muhammad Ali: A Memoir of Love, Loss and Forgiveness by Hana Yasmeen Ali
Hana Yasmeen Ali
Used - Very Good
Paperback
Transworld Publishers Ltd
2019-09-17
480
055217372X
9780552173728
N/A
Book picture is for illustrative purposes only, actual binding, cover or edition may vary.
This is a used book - there is no escaping the fact it has been read by someone else and it will show signs of wear and previous use. Overall we expect it to be in very good condition, but if you are not entirely satisfied please get in touch with us.