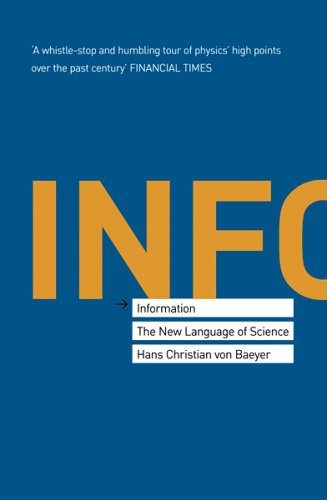 Used Price
$17.99
Free Shipping in the US
'A whistle-stop and humbling tour of physics high points over the past century' Jerome Burne, FT magazine
Reviews:
Trustpilot
Very Good

'A whistle-stop and humbling tour of physics high points over the past century' Jerome Burne, FT magazine

Today we live in the information age. Wherever we look it surrounds us, and with the help of ever more efficient devices, from the internet through to mobile phones, we are producing, exchanging and harnessing more than ever before. But information does far more than define our modern age - at a fundamental level it defines the material world itself, for it is through its mediating role that we gain all our knowledge, and everything derives its function, existence and meaning from it.

In twenty-five short chapters, von Baeyer takes us from the birth of the concept of information and its basic language, the bit, through to the coal-face of contemporary physics and beyond relativity; black holes; randomness; abstraction - explaining why it has the power to become the most fundamental concept in physics - as fundamental as mass and energy.

Hans Christian von Baeyer is Chancellor Professor of Physics at the College of William and Mary, Williamsburg, Virginia. His essays in Discover, The Sciences, Reader's Digest and The Gettysburg Review have won him several awards, including the 1990 Science Journalism Award of the American Association for the Advancement of Science, and a 1991 National Magazine Award. He has also written over seventy technical and popular articles.

GOR001292394
Information: The New Language of Science by Hans Christian von Baeyer
Hans Christian von Baeyer
Used - Very Good
Paperback
Orion Publishing Co
2004-11-04
272
0753817829
9780753817827
N/A
Book picture is for illustrative purposes only, actual binding, cover or edition may vary.
This is a used book - there is no escaping the fact it has been read by someone else and it will show signs of wear and previous use. Overall we expect it to be in very good condition, but if you are not entirely satisfied please get in touch with us.