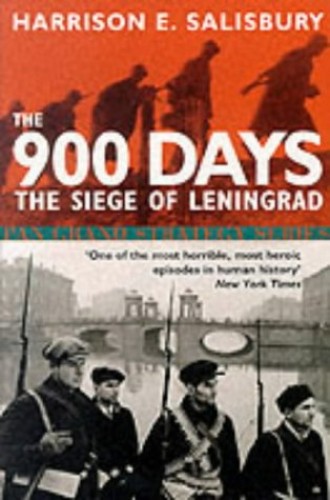 In Stock
$11.39
The classic account, using eyewitness testimony, of the Siege of Leningrad
Very Good
6 in stock

900 Days: The Siege of Leningrad by Harrison E. Salisbury

From September 1941 to January 1944 Leningrad was a city under siege from three German armies. Nearly three million people were trapped inside Leningrad; when the siege was lifted just under half were dead, killed by Germans or by their allies `Generals Hunger, Cold and Terror.'to write this acclaimed history of the siege, Harrison Salisbury interviewed survivors, had access to Soviet archives and drew on his wide experience as a correspondent in the Soviet Union.The result: a classic and compelling account of one of the great epic dramas of the Second World War. A story of courage and cowardice, heroism and horror, suffering and endurance.

`A massive book to match the magnitude of the subject...a vivid and passionate narrative...a proper monument to the Leningrad epic, true in scale, movingly written, deeply researched, presented in all heroism, suffering and chilling cruelties, made worse by Stalin's political sadism.' Sunday Times

`One of the most horrible, most heroic episodes in human history' New York Times

GOR001246007
900 Days: The Siege of Leningrad by Harrison E. Salisbury
Harrison E. Salisbury
Used - Very Good
Paperback
Pan Macmillan
2000-01-07
656
0330392824
9780330392822
N/A
Book picture is for illustrative purposes only, actual binding, cover or edition may vary.
This is a used book - there is no escaping the fact it has been read by someone else and it will show signs of wear and previous use. Overall we expect it to be in very good condition, but if you are not entirely satisfied please get in touch with us.