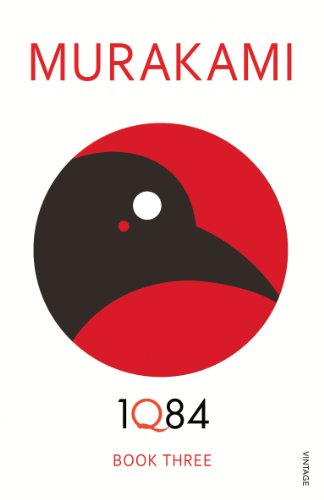 Book Two of 1Q84 ended with Aomame standing on the Metropolitan Expressway with a gun between her lips.

But things are moving forward, and Aomame does not yet know that she and Tengo are more closely bound than ever.

Tengo is searching for Aomame, and he must find her before this world's rules loosen up too much.

Book Two of 1Q84 ended with Aomame standing on the Metropolitan Expressway with a gun between her lips.

She knows she is being hunted, and that she has put herself in terrible danger in order to save the man she loves.

But things are moving forward, and Aomame does not yet know that she and Tengo are more closely bound than ever.

Tengo is searching for Aomame, and he must find her before this world's rules loosen up too much.

He must find her before someone else does.

Murakami's magnum opus * Japan Times *
1Q84 has a range and sophistication that surpasses anything else in his oeuvre. It is his most achieved novel; an epic in which form and content are neatly aligned... So like Murakami himself, I'll borrow from Orwell: 1Q84 is quite simply doubleplusgood * Independent on Sunday *
1Q84 reads like a cross between Stieg Larsson and Roberto Bolano... In its bones, this novel is a thriller * Daily Telegraph *
It is a work of maddening brilliance and gripping originality, deceptively casual in style, but vibrating with wit, intellect and ambition -- Richard Lloyd Parry * The Times *
Which other author can remind you simultaneously of Fyodor Dostoyevsky and JK Rowling, not merely within the same chapter but on the same page? Viewed through the "post-modern" lens, his exemplary blend of a light touch and weighty themes, of high literature and popular entertainment, ticks every box. Posh and pop, sublimity and superficiality, history and fantasy, trash and transcendence: they switch positions and then fuse -- Boyd Tonkin * Independent *

GOR004414889
1Q84: Book 3 by Haruki Murakami
Haruki Murakami
1Q84
Used - Very Good
Paperback
Vintage Publishing
2012-08-02
464
0099549050
9780099549055
N/A
Book picture is for illustrative purposes only, actual binding, cover or edition may vary.
This is a used book - there is no escaping the fact it has been read by someone else and it will show signs of wear and previous use. Overall we expect it to be in very good condition, but if you are not entirely satisfied please get in touch with us.