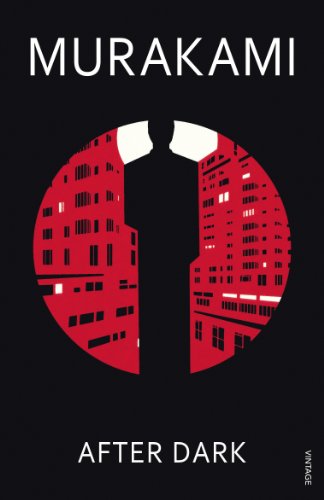 After Dark
by Haruki Murakami

Used Price
$11.39
Free Shipping in the US
Eyes mark the shape of the cityThe midnight hour approaches in an almost-empty diner. Mari sips her coffee and reads a book, but soon her solitude is disturbed: a girl has been beaten up at the Alphaville hotel, and needs Mari's help.
Reviews:
Trustpilot
Very Good Good

After Dark by Haruki Murakami

Eyes mark the shape of the city The midnight hour approaches in an almost-empty diner. Mari sips her coffee and reads a book, but soon her solitude is disturbed: a girl has been beaten up at the Alphaville hotel, and needs Mari's help. Meanwhile Mari's beautiful sister Eri lies in a deep, heavy sleep that is 'too perfect, too pure' to be normal; it has lasted for two months. But tonight as the digital clock displays 00:00, a hint of life flickers across the television screen in her room, even though it's plug has been pulled out. Strange nocturnal happenings, or a trick of the night?

"Stylish and enigmatic" * Economist *
"The novel could be an allegory of sleep, a phenomenology of time, or a cinematic metafiction. Whatever it is, its memory lingers" * Guardian *
"The narrative carries considerable literary weight with a rare grace" * Spectator *
"A captivating mood piece, delicate and wistful" * Evening Standard *

GOR001278053
After Dark by Haruki Murakami
Haruki Murakami
Used - Very Good
Paperback
Vintage Publishing
2008-01-05
208
0099506246
9780099506249
N/A
Book picture is for illustrative purposes only, actual binding, cover or edition may vary.
This is a used book - there is no escaping the fact it has been read by someone else and it will show signs of wear and previous use. Overall we expect it to be in very good condition, but if you are not entirely satisfied please get in touch with us.