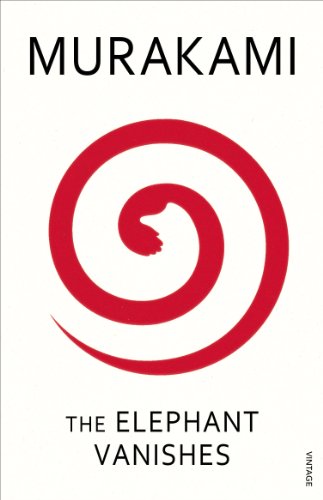 The Elephant Vanishes
by Haruki Murakami

Used Price
$14,39
Free Shipping in the US
A collection that features such stories as: When a man's favourite elephant vanishes, the balance of his whole life is subtly upset; a couple's midnight hunger pangs drive them to hold up a McDonald's; a woman finds she is irresistible to a small green monster that burrows through her front garden; and, more.
Reviews:
Trustpilot
Very Good Good

The Elephant Vanishes by Haruki Murakami

A dizzying short story collection that displays Murakami's genius for uncovering the surreal in the everyday, the extraordinary within the ordinary

When a man's favourite elephant vanishes, the balance of his whole life is subtly upset. A couple's midnight hunger pangs drive them to hold up a McDonald's. A woman finds she is irresistible to a small green monster that burrows through her front garden. An insomniac wife wakes up in a twilight world of semi-consciousness in which anything seems possible - even death.

In every one of these stories Murakami makes a determined assault on the normal.

How does Murakami manage to make poetry while writing of contemporary life and emotions? I am weak-kneed with admiration * Independent on Sunday *
Enchanting...intriguing... All of these tales have a wonderfully surreal quality and a hip, witty tone * Wall Street Journal *
All the stories take place in parallel worlds not so much remote from ordinary life as hidden within its surfaces: secret alleys that afford unexpected - and unsettling - views * New York Times *
Like the best thriller fiction, it nags you with the sensation that Something Nasty is about to happen * Sunday Times *
Most collections of short stories work by the interplay of different voices. This one offers the more satisfying rewards of a novel: unity of tone and a richness of recurring detail that creates its own texture: spaghetti, lawns, hamburgers, beer-drinking, kid sisters, Sunday afternoons, a man's name * Independent *

GOR001217894
The Elephant Vanishes by Haruki Murakami
Haruki Murakami
Used - Very Good
Paperback
Vintage Publishing
2001-02-08
336
0099448750
9780099448754
N/A
Book picture is for illustrative purposes only, actual binding, cover or edition may vary.
This is a used book - there is no escaping the fact it has been read by someone else and it will show signs of wear and previous use. Overall we expect it to be in very good condition, but if you are not entirely satisfied please get in touch with us.