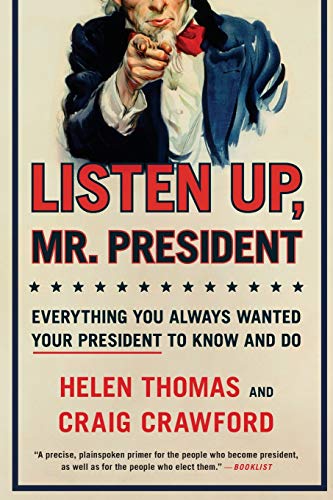 Helen Thomas, who covered the administrations of ten presidents in a career spanning nearly sixty years, teams up with veteran journalist Craig Crawford to provide a witty, history-rich examination of what it takes to be a good president and lead our nation. With sharp observations and dozens of examples, Thomas and Crawford outline the qualities, attitudes, and political and personal choices that make for the most successful leaders . . . and the least. Calvin Coolidge, who hired the first professional speechwriter in the White House, illuminates the importance of choosing words wisely. William Howard Taft, notorious for being so fat he broke his White House bathtub, shows how not to cultivate a strong public image. John F. Kennedy, who could handle the press corps and their questions with aplomb, demonstrates how to establish a rapport with the press and open oneself up to the public. Ronald Reagan, who acknowledged the Iran- Contra affair in a television address, illustrates how telling hard truths can earn forgiveness and even public trust.

Part history lesson, part guide to the presidency, this entertaining and exceedingly edifying read highlights what presidents should aspire to and what every citizen should expect and demand from our leaders.

A precise, plainspoken primer for the people who become president, as well as for the people who elect them." --Booklist
Thomas, the doyenne of the White House press corps for over 30 years, stops asking questions and starts giving answers in this how-to guide to the American presidency. Her incessant questioning of power drives home the underlying message of the book: it's a primer not, at heart, for those who would be president but for those who would elect one." --Publishers Weekly

Helen Thomas is the dean of the White House press corps. The recipient of more than forty honorary degrees, she was honored in 1998 with the inaugural Helen Thomas Lifetime Achievement Award, established by the White House Correspondents' Association. The author of Thanks for the Memories, Mr. President; Front Row at the White House; and Dateline: White House, she lives in Washington, D.C., where she writes a syndicated column for Hearst.

Craig Crawford is a columnist for Congressional Quarterly's CQ Politics and his writing appears regularly in newspapers throughout the country. He is the former editor-in-chief of The Hotline and was previously a reporter for the Orlando Sentinel. He is the author of Attack the Messenger and The Politics of Life. He lives in Washington, D.C., and blogs daily at craigcrawford.com.

GOR009513837
Listen Up, Mr. President by Helen Thomas
Helen Thomas
Used - Very Good
Paperback
Simon & Schuster
2011-01-01
224
1439148163
9781439148167
N/A
Book picture is for illustrative purposes only, actual binding, cover or edition may vary.
This is a used book - there is no escaping the fact it has been read by someone else and it will show signs of wear and previous use. Overall we expect it to be in very good condition, but if you are not entirely satisfied please get in touch with us.