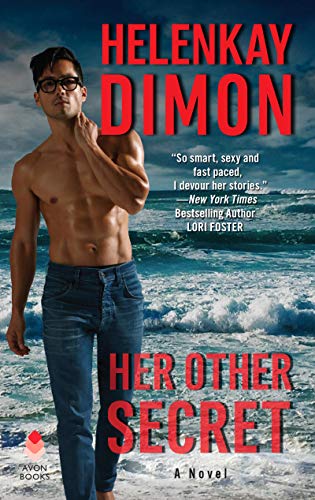 Her Other Secret
by HelenKay Dimon

Used Price
$12.39
Free Shipping in the US
Fleeing from a shattering scandal, she has a new name, a chance at a new beginning, and a breathtaking new view: Hansen Rye.

...or a private trap for two lovers?

After a devastating family tragedy, Hansen finds the pebbled shores of the faraway island to be an ideal refuge. He's no stranger to Hansen.

Her Other Secret Summary

Her Other Secret: A Novel by HelenKay Dimon

Is it the perfect escape?

Whitaker Island is more than a getaway. For Tessa Jenkins, the remote strip of land in Washington state is a sanctuary. Fleeing from a shattering scandal, she has a new name, a chance at a new beginning, and a breathtaking new view: Hansen Rye. It's hard not to crush on Whitaker's hottest handyman. At six-foot-three and all kinds of fine, he's also intensely private-and the attraction between them soon simmers dangerously out of control.

...or a private trap for two lovers?

After a devastating family tragedy, Hansen finds the pebbled shores of the faraway island to be an ideal refuge. Letting down his guard for the sexy, impulsive Tessa is an unexpected pleasure. But there's another newcomer to Whitaker. He's no stranger to Hansen. And when he's murdered, the crime casts a threatening shadow. As suspicion falls on Hansen, all his secrets are about to collide with Tessa's. Now the pasts they were determined to outrun are catching up to them. So is a killer who's putting their love-and their lives-on the line.

Her Other Secret Reviews

"Lovers intent on putting their pasts behind them find fulfillment and danger on a secluded private island where everyone has something to hide. This riveting story with a sexy, edgy vibe moves at breakneck speed and splendidly launches a hot new series." -- Library Journal
"Murder runs rampant on Whitaker Island, and the list of possible suspects is almost as big as the population in Dimon's intense romantic thriller... Dimon perfectly balances the romance with the suspense in this thrilling, action-filled whodunit." -- Publishers Weekly
"Dimon demonstrates her romantic suspense chops, setting her new series on an island full of residents who are part secret keepers, part gossipmongers. A fun, sexy, romantic mystery and a great series launch." -- Kirkus Reviews
"RITA Award-winning Dimon turns up the sensual heat level to full boil in the compulsively readable launch to her Whitaker Island series, while still delivering the razor-sharp wit for which she has become known and loved." -- Booklist

Helenkay Dimon spent the years before becoming a romance author as a . . . divorce attorney. Not the usual transition, she knows. Good news is she now writes full time and is much happier. She has sold over thirty novels, novellas, and shorts to numerous publishers. Her nationally bestselling and award-winning books have been showcased in numerous venues, and her books have twice been named "Red-Hot Reads" and excerpted in Cosmopolitan magazine. But if you ask her, she'll tell you the best part of the job is never having to wear pantyhose again.

GOR010764794
Her Other Secret: A Novel by HelenKay Dimon
HelenKay Dimon
Used - Good
Paperback
HarperCollins Publishers Inc
2019-07-17
384
0062892789
9780062892782
N/A
Book picture is for illustrative purposes only, actual binding, cover or edition may vary.
The book has been read but remains in clean condition. All pages are intact and the cover is intact. Some minor wear to the spine.