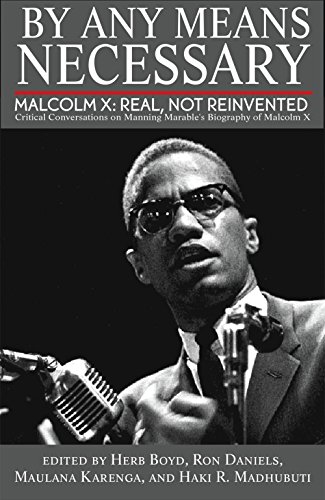 By Any Means Necessary
by Herb Boyd

Compiled as a response to Manning Marable's controversial new biography of Malcolm X, more than 30 noted scholars from the African American community offer their opinions on Marable's portrayal of the man whose short life still inspires speculation of what might have been.

By Any Means Necessary Summary

By Any Means Necessary: Malcolm X: Real, Not Reinvented by Herb Boyd

Compiled as a response to Manning Marable's controversial new biography of Malcolm X, more than 30 noted scholars from the African American community offer their opinions on Marable's portrayal of the man whose short life still inspires speculation of what might have been.

Customer Reviews - By Any Means Necessary

Herb Boyd By Any Means Necessary
Herb Boyd is a journalist, activist, teacher, and has authored or edited 23 books, including By Any Means Necessary: Malcolm X Real Not Reinvented (co-edited with Haki Madhubuti, Maulana Karenga, and Ron Daniels); and Civil Rights: Yesterday & Today. His book Baldwin's Harlem, a biography of James Baldwin, was a finalist for a 2009 NAACP Image Award. In 1995, with Robert Allen, he was a recipient of an American Book Award for Brotherman--The Odyssey of Black Men in America, an anthology. We Shall Overcome, a media-fusion book with narration by the late Ossie Davis and Ruby Dee, is used in classrooms all over the world, as is his Autobiography of a People and The Harlem Reader. His articles can be found in such publications as The Black Scholar, The Final Call, the Amsterdam News, Cineaste, Downbeat, The Network Journal, and The Daily Beast among others.
Ron Daniels is President of the Institute of the Black World 21st Century, Founder of the Haiti Support Project and Distinguished Lecturer at York College City University of New York. He previously served as Executive Director of the Center for Constitutional Rights, Executive Director of the National Rainbow Coalition and Deputy Campaign Manager of Rev. Jesse L. Jackson's 1988 Campaign for President. In 1990, along with Dr. James Turner, Dr. Daniels served as Co-Chairman of the National Malcolm X Commemoration Commission which proclaimed May 19, the birthday of Malcolm X, a National African American Day of Commemoration.
Maulana Karenga is Professor and chair of Africana Studies at California State University, Long Beach. An activist-scholar who has played a major role in Black intellectual and political culture since the 60s, he is the creator of the pan-African cultural holiday Kwanzaa and the author of several books including the forthcoming novel The Liberation Ethics of Malcolm X: An Emancipatory Critique and Corrective, a study of the social and ethical philosophy of Malcolm X.
HAKI R. MADHUBUTI--poet, publisher, editor and educator--has published more than 31 books. He founded Third World Press in 1967 and is also a founder of the Institute of Positive Education/New Concept School, co-founder of Betty Shabazz International Charter School, Barbara A. Sizemore Middle School, and DuSable Leadership Academy. Professor Madhubuti is also a founder and chairman of the board of the International Literary Hall of Fame for Writers of African Descent. He is an award-winning poet and recipient of the National Endowment for the Arts and National Endowment for the Humanities fellowships, American Book Award, and others. His distinguished fortythree- year teaching career includes faculty positions at Columbia College of Chicago, Cornell University, University of Illinois at Chicago, Howard University, Morgan State University, the University of Iowa and Chicago State University. Madhubuti most recently served as the 2010-2011 Ida B. Wells-Barnett University Professor at DePaul University. His latest book of poems is Honoring Genius: Gwendolyn Brooks: The Narrative of Craft, Art, Kindness and Justice.

CIN000407868
By Any Means Necessary: Malcolm X: Real, Not Reinvented by Herb Boyd
Herb Boyd
Used - Like New
Paperback
Third World Press,U.S.
2012-02-15
280
0883783363
9780883783368
N/A
Book picture is for illustrative purposes only, actual binding, cover or edition may vary.
The book has been read, but looks new. The book cover has no visible wear, and the dust jacket is included if applicable. No missing or damaged pages, no tears, possible very minimal creasing, no underlining or highlighting of text, and no writing in the margins.