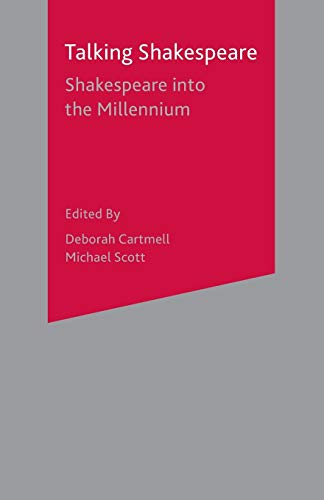 Used Price
$45.99
Free Shipping in the US
This text focuses on the reciprocal relationship between past and present, the way Shakespeare talks to us, the ways in which we talk about Shakespeare, and the way in which Shakespeare, ultimately, is "all talk". It looks at the fields of English studies, performance studies and cultural studies.
Reviews:
Trustpilot
Like New

Talking Shakespeare: Shakespeare into the Millennium by Hester Bradley

'An enjoyable, stimulating read...The book is wide-ranging in scope with thoughtful discussions of stage performance and film and intriguing speculations on touring practice. The appendix with details of electronic sources is also handy for students.' - Dr Maria Jones, University of Wolverhampton 'An excellent selection of articles on a wide range of topics. Will strongly recommend to my students.' - David Olive, Manchester Metropolitan University 'Excellent material for approaching texts from Cultural Studies angle.' - Ann Heilmann, University of Wales Swansea 'A rich and lively volume which gives testimony not only to the vitality of Shakespeare studies in our time but also to the existence of a lively and impressive band of Shakespeare scholars centred at De Montfort University.' - Christopher Wortham, University of Western Australia

DEBORAH CARTMELL is Principal Lecturer in the department of English at De Montfort University, Leicester.

GOR010807843
Talking Shakespeare: Shakespeare into the Millennium by Hester Bradley
Hester Bradley
Used - Like New
Paperback
Palgrave Macmillan
2001-06-18
253
0333777735
9780333777732
N/A
Book picture is for illustrative purposes only, actual binding, cover or edition may vary.
The book has been read, but looks new. The book cover has no visible wear, and the dust jacket is included if applicable. No missing or damaged pages, no tears, possible very minimal creasing, no underlining or highlighting of text, and no writing in the margins.