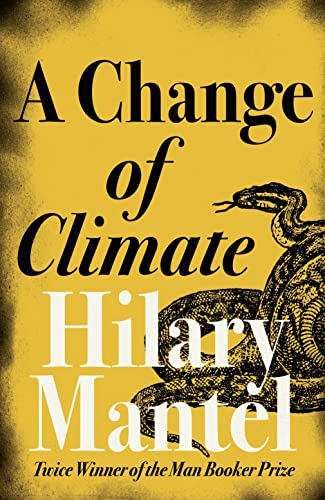 A Change of Climate
by Hilary Mantel

From the double Man Booker prize-winning author of 'Wolf Hall' and 'Bring Up the Bodies', this is an epic yet subtle family saga about broken trusts and buried secrets.

A Change of Climate Summary

A Change of Climate by Hilary Mantel

From the double Man Booker prize-winning author of 'Wolf Hall' and 'Bring Up the Bodies', this is an epic yet subtle family saga about broken trusts and buried secrets.

Ralph and Anna Eldred live in the big Red House in Norfolk, raising their four children and devoting their lives to charity. The constant flood of 'good souls and sad cases', children plucked from the squalor of the East London streets for a breath of fresh countryside air, hides the growing crises in their own family, the disillusionment of their children, the fissures in their marriage.

Memories of their time as missionaries in South Africa and Botswana, of the terrible African tragedies that have shaped the rest of their lives, refuse to be put to rest and threaten to destroy the fragile peace they have built for themselves and their children.

This is a breathtakingly intelligent novel that asks the most difficult questions. Is there anything one can never forgive? Is tragedy ever deserved? Can you ever escape your own past? A literary family saga written with the skill and subtlety of a true master, this is Hilary Mantel at her best.

A Change of Climate Reviews

'There are very few novels that not only bristle with ideas but leave you asking questions about those ideas, again and again, your world turned upside down. Mantel has managed to do this.' Sunday Times

'The best book she's written ... She writes about punishing subjects so freshly it is as if they had never been written about before.' Observer

'It has the tension of a first-rate thriller and the breadth of a family saga ... Its compassion and its intellectual energy mark her as the novelist of her generation who will achieve a lasting greatness.' Literary Review

'A complex and highly intelligent portrayal of injustice, bereavement and the loss of faith ... Hilary Mantel has created that rare thing, a page-turner with a profound moral dimension.' Daily Telegraph

'A work of exquisite craftsmanship that asks enormous questions.' Independent

GOR009309857
A Change of Climate by Hilary Mantel
Hilary Mantel
Used - Like New
Paperback
HarperCollins Publishers
2005-04-18
368
0007172907
9780007172900
N/A
Book picture is for illustrative purposes only, actual binding, cover or edition may vary.
The book has been read, but looks new. The book cover has no visible wear, and the dust jacket is included if applicable. No missing or damaged pages, no tears, possible very minimal creasing, no underlining or highlighting of text, and no writing in the margins.