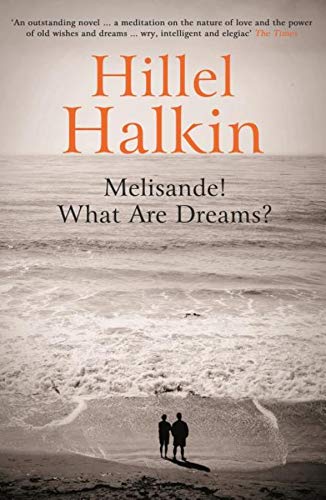 Melisande! What Are Dreams?
by Hillel Halkin

Used Price
$9.69
Free Shipping in the US
An older man writes to and about his wife... in this moving debut novel by the illustrious translator and political commentator
Reviews:
Trustpilot
Very Good Good

Melisande! What Are Dreams? Summary

Melisande! What Are Dreams? by Hillel Halkin

An inspiring novel; a philosophical love story; a moving ode to a woman, as joyful and celebratory as it is elegiac. The narrator is a man in his forties, a scholar of ancient Greek philosophy known as Hoo. He has been given the nickname by Mellie, the woman he addresses in this book while exploring his memories of their years together and apart. The two of them have known each other since high school in New York in the 1950s - and perhaps, Hoo thinks, much longer than that. Only as the novel unfolds do his reasons for writing to her, and the full nature of their relationship, become clear.

Customer Reviews - Melisande! What Are Dreams?

Melisande! What Are Dreams? Reviews

An outstanding novel... a meditation about the nature of love and the power of old wishes and dreams... wry, intelligent and elegiac -"The Times"
Lovely, erudite, romantic and careful. The vagabond, the scholar and the woman are echoing and reflecting in my mind still, poetic, subtle and passionate about the things that have always mattered. This is a long drink of cool water to anyone who likes an intelligent novel - Louisa Young, author, My Dear I Wanted To Tell You
Pitch perfect - filled with quiet wisdom, and laced with nostalgia yet never cloying - ***** "Financial Times"
To be transported to New York of the 1950s; to be absorbed in an elegy of beautiful prose; to unearth a startlingly fresh novel from a colossus of Hebrew literature; and, most of all, to gain a sharp insight into humanity itself; read this book - Jake Wallis Simons
Gentle and satisfying... Halkin has a tender eye for the bittersweet journey of love: shared joys and tiny betrayals, mistakes and triumphs, and, finally, the healing power of forgiveness. - *****"Independent"
A sparse, multinuanced, erudite and exceptionally accomplished offering, which makes one regret that Halkin delayed writing novels until now.The plot is enhanced throughout by the refined psychological and philosophical reflections... A veritable treat for readers. - *****"Jewish Chronicle"
Melisande! What Are Dreams? is written as an extended love letter that recounts the way fate and circumstance conspire alternately to separate and unite the narrator and his beloved ... The rhythm of the couple's life together is movingly evoked - T"LS"
Unique and moving... The story of an intellectual awakening has been told before, but never better... Halkin has a knack for the unexpected example, which operates like a button. Push it, and a world of learning gushes to the surface... a book for anyone who loves literature and its power to transform ordinary lives into everlasting wonders - "Jewish Idea Daily"
An American love story spanning the 1950s to 1970s. It takes the form of a love letter written by Hoo, a scholar of ancient Greek philosophy. As the story unfolds, Hoo's relationship with Melisande and his reason for writing become clear - "Big Issue in the North"
A genuine exploration of love, this novel is a long, impassioned billet-doux written by a man to his wife. Hoo, a classics scholar, relives their relationship from their aspirational college years in Manhattan in the 1960s, to their domestication in ""the great American interior"" of suburban Illinois, to what Hoo ruefully calls ""the Cimmerian years."" Hoo is touchingly guided in his memories by the notes that he and Mellie left each other in the pages of books they were reading-sweet nothings, small scoldings, or just reminders to take the lamb chops out of the freezer. He has saved them all, he says, in line with the ""old Jewish custom of not destroying any writing with God's name on it."" But the novel is never mawkish; it portrays the multitudinous properties of a lifelong love affair, its blisses and its cruelties. - *****" Wall Street Journal""

HILLEL HALKIN is a writer, critic, and translator whose essays have regularly appeared in publications like Commentary and The New Republic for over thirty years. His non-fiction books include Letters To An American Jewish Friend, Across The Sabbath River and, most recently, a biography of the medieval poet Yehuda Halevi. Born in New York in 1939, Halkin now lives in Israel, between Tel Aviv and Haifa. This is his first novel.

GOR005359241
Melisande! What Are Dreams? by Hillel Halkin
Hillel Halkin
Used - Very Good
Paperback
Granta Books
2013-04-04
224
1847085008
9781847085009
N/A
Book picture is for illustrative purposes only, actual binding, cover or edition may vary.
This is a used book - there is no escaping the fact it has been read by someone else and it will show signs of wear and previous use. Overall we expect it to be in very good condition, but if you are not entirely satisfied please get in touch with us.